Drew Edward Davies, PhD, an associate professor of musicology at Northwestern University Bienen School of Music, leads a Prelude pre-concert discussion at 7:30 p.m. focusing on the history of compositions found in regions not typically associated with classical music. Concert highlights include Rodríguez de Hita’s “Missa Ecce Sacerdos Magnus” and the U.S. premiere of other works unearthed in Mexico and linked to the Spanish empire that had been met with disinterest, until now.

The upcoming event adds a new dimension to the CAO’s collaboration with The Kapelle because of the featured music’s uncommon origins, which capture sensibilities of both 18th-century Europe and the New World. The CAO’s relationship with the choral ensemble dates to 2007 when both groups, along with chamber choir Cantate, performed Bradley Ellingboe’s “Requiem.”

The “Rediscovered Treasures” series solidifies the CAO’s niche in a local music scene “saturated with eclectic styles,” said Charles P. Brown, DMA, Kapelle Conductor and Concordia University associate professor of music. “This particular venture with the CAO allows for an intimate collaboration between orchestra and choir with jubilant, meditative, and reflective moments throughout the program,” Brown said. “This music is evocative, and it makes me wonder how much more beautiful music is waiting to be rediscovered.”

The CAO is at the forefront of an international movement to draw public attention to the music of the Spanish colonial period; Mexico alone preserves the legacy of thousands of musical works still unheard there or in the U.S. The CAO’s first album released in 2013, “Al Combate: Rediscovered Galant Music from Eighteenth-Century Mexico,” featured works by Ignacio Jerusalem (1707-1769) and Santiago Billoni (ca. 1700–1763) and the orchestra received high praise from international publications, including Early Music Today.

“This music is both familiar and unconventional -- to the surprise and delight of listeners” Davies said. “It sounds a lot like Mozart or Handel or other composers well-known to classical music audiences. However, the fact that it comes from Spain or Mexico explodes previously held conceptions of baroque and classical music by opening up a wider slate on which to conceive of the musical past.”

About Chicago Arts Orchestra
The CAO, Artistic Director Javier José Mendoza, strives to touch an underserved and neglected audience by championing all types of art music. The CAO was established by musicians and creative artists to perform great music and to make chamber music accessible and affordable. Comprising young professional musicians with active performance schedules in Chicago, the CAO provides ducational opportunities to the community through innovative programming of historic and new orchestral music. For more information, visit chicagoartsorchestra.org 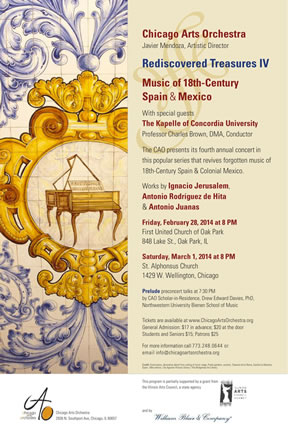 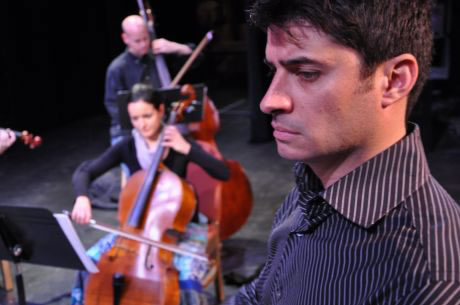 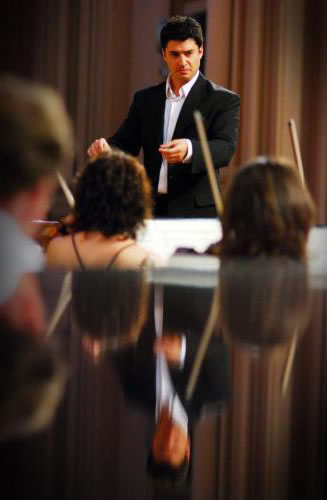