EKATERINBURG, Russia, 2016-Jun-08 — /EPR Network/ — An international group of scientists has discovered the molecule of phosphorus oxide (PO), which has great importance in prebiotic chemistry, in the interstellar medium. It plays a key role in the formation of the DNA double helix and is directly linked to the origin of life in the universe. The PO molecule presence in the two star-forming regions in our galaxy was first discovered by a 30-meter radio telescope at the Institute of Millimeter Radio Astronomy (IRAM) located in the mountains of Serra Nevada near Granada (Spain). A scientist from Ural Federal University was among the research team.

“In Munich and Yekaterinburg, we study how simple and complex molecules, possible constituent elements of a future life, form and evolve in the interstellar medium”, explains Anton Vasyunin of the Center for Astrochemical Research of Max Planck Institute for Extraterrestrial Physics (CAS-MPE, Munich, Germany) and the Astronomical Observatory of Ural Federal University. “Our numerical models allowed to interpret the results of our observations, where the molecule of phosphorus oxide was first discovered. We found that this compound actively forms around young stars that heat up the clouds of gas and dust that surround them. The simulation results correspond well with the observations”.

Astronomers believe that the prebiotic molecules detected in the interstellar medium might be components of the first living organisms. Studying them will bring the scientists closer to understanding the origin of life in the universe. Phosphorus (P) is one of the most important chemical elements for the development of life. Chemical compounds containing phosphorus are involved in forming the structure of living cells and intracellular energy transfer. The connection of phosphorus and oxygen present in the PO molecule contributes to formation of “skeletons” of the deoxyribonucleic acid (DNA) molecules, the genetic information containers for living organisms.

“Despite its astrobiological importance, the PO molecule had not been previously detected in the star-forming regions”, says Victor M. Rivilla, astronomer at the Arcetri Observatory in Florence (INAF-OAA), who is a co-author of the research paper. “We were very interested in the detection of phosphorus oxide in the stellar nursery, as it may mean that one of the key elements of the DNA molecule forms simultaneously with stars and planets, where life might eventually emerge”.

The paper with the results of the research done by the scientists from the Observatory of Arcetri (INAF-OAA, Florence, Italy), the Center for Astrobiology (CAB-CSIC, Madrid, Spain), the Center astrochemical Research Institute for Extraterrestrial Physics of the Max Planck Society (CAS-MPE, Munich, Germany) and the Astronomical observatory of Ural Federal University (Ekaterinburg, Russia) has been accepted for publication in The Astrophysical journal. 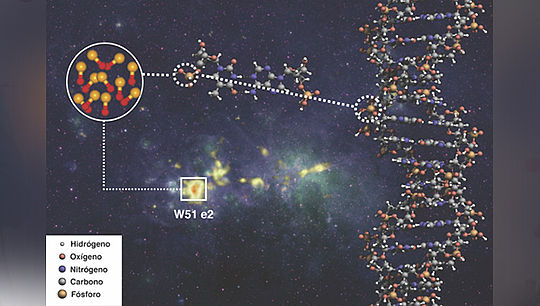 Star-forming region W51 e2, where the PO molecule was detected