BUDAPEST, Hungary, 2016-Oct-07 — /EPR Network/ — The warm and sincere meeting took place after the next survey of Hungarian doctors for Ukrainian boy from Mykolaiv City, which cares by the patron Iankovskyi, which fully funding the treatment of 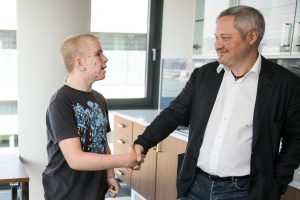 the child and providing the moral support. At this time, completing the next stage of the Maxim Krivonosov medical survey, the doctors gave a real beam of light – a good hope for the child’s recovery. The boy did not give up, together with benefactors; he is fighting for his life.

During the period of treatment follow-up the examinations have shown the some progress – improvement, the disease does not progress, and there is a real chance of recovery. In a friendly meeting attended by a special guest – Vadim Merikov, former head of Mykolaiv regional state administration, which, together with Igor Iankovskyi talked with boy, learning about the state of his health, after hearing predictions of doctors, a further course of treatment plans. It is thanks to Vadim Merikov, caring volunteers helped a family from Mykolaiv boy.

After all, from the birth date of Maxim suffered a severe illness. The family asked for help to Iankovskyi Foundation, when suddenly lost hope and basic support, a strong shoulder. The Maxim’s father – Sergey Krivonosov, the officer of the 79th special airmobile brigade, was tragically killed during the hostilities ATO. The sick boy was a “son of the Hero of Ukraine”, the one with his mother and with his illness. On the advice of those who care, Anastasia Kryvonosova (Maxim’ mother) decided to write a letter to Igor Iankovskyi. The appeal was considered. Since then has passed more than a year – the founder of the Charity Foundation “Initiative for the Future”, patron Iankovskyi serves curator of treatment to Maxim boy. Igor Iankovskyi funded the treatment, a trip to Hungary for the survey, providing the necessary medications for a child. After treatment, Maxim Krivonosov undergoing tests in the best specialized clinic in Budapest. Doctors return to the child a chance to live a full life. During this time the family of Mykolaiv, burnt with fire and pain events in the East of Ukraine, in the end, to get reliable help and support in difficult times. 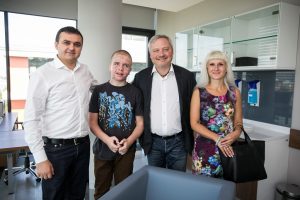 “I am struck by the boy’s resistance. He is seriously ill, but did not give up, and we – are helping to survive in an unequal battle with the disease. Now, after more than 1.5 years of the treatment we see the real improvement. Previously, because of an inoperable tumor in the brain, he had frequent attacks of epilepsy; however, they stopped during the treatment. Now he struggles with the disease. I believe that he will cope. At a minimum, we will do everything possible for that. Today such cases are difficult to treat in Ukraine. In many ways, the significant progress in the treatment of such children was made possible by innovations in the field of medicine outside the country. I am sure, that soon we will be able to provide the all necessary assistance in Ukrainian hospitals too”, – says Igor Iankovskyi.

Together with the patron, the family of Major Sergei Krivonosov believes in its future, when Maxim will recover, get an education and will become a full-fledged citizen of Ukraine, healthy, full of strength and energy.

If you interested about chronicle of events and the history of the treatment of Maxim Krivonosov from the city of Mykolaiv, please, see the links: