KIEV, Ukraine 2016-Oct-07 — /EPR Network/ — “In the “Yellow Bus” project I was attracted by the fact that the organizers have set themselves an important goal is not only to improve the children of the sea, but also to inspire them to the wonderful world of cinema. And we see today that under the guidance of professionals, even the kids begin to create small masterpieces. I am very pleased that we were able to join this initiative and today we see excellent results”, – said the founder of the “Initiative for the Future” Igor Iankovskyi.

Friendly Kiev meeting of Igor Iankovskyi with a team of volunteer of the cultural and educational project “Yellow Bus”, with children from the front zone ATO (Antiterrorist Operation zone) and settlers from the East of Ukraine, which, with the financial support of the “Initiative for the Future” rested on the sea near Odessa city in the “The Summer cinema camp of peace 2016”, have become a unique and creative outcome report – an amazing achievement of young Ukrainians struck all those who took part in this unique project!

The initiators of creation of the “The Summer cinema camp of peace 2016” – the known filmmakers Jaroslav Pilunskyi and Larissa Artyugina told about how two weeks could not only improve the nearly 50 children in the sea, but also to involve them in the filmmaking process. Young residents of Donbass region have suffered from the military conflict enthusiastically joined in the creation of short films by own script. In a relaxed atmosphere for the “coffee and sweets” organized by the Iankovskyi Foundation, the children talked about their adventures during the shooting of his first film. 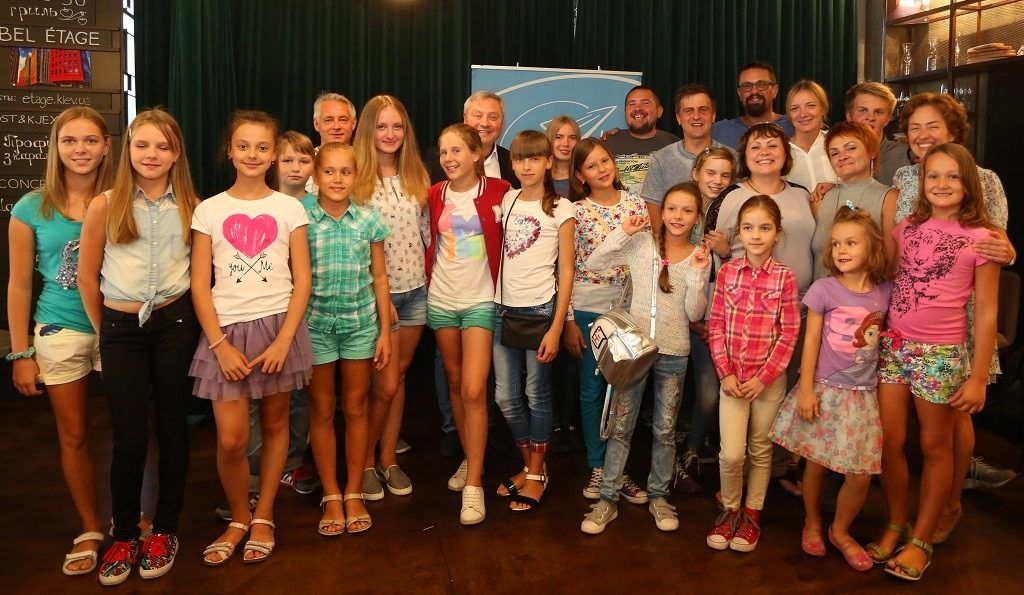 Just on two weeks they were able not only to create full-fledged creative teams, but also to make the 4 short films, where children were as writers and operators, and directors, and actors, as well as to try themselves in dozens of cinema related professions. In the near future of the creative efforts of young talent they see their peers in the combat zone of the East of Ukraine. However, it seems that those wishing to see the creative achievements of young Ukrainian will be a lot. After their first blockbusters, were filmed under the direction of talented artists, whose names are well-known in the world.

“Cinematic Peace Camp – a unique opportunity for talented children who live and study in a combat zone, to go beyond their world transformed by war, unleash creativity, to believe in their own abilities, to take the first bold steps towards their future profession. Our goal – to create all the necessary conditions, form around the children safe creative information field”, – comments the cameraman Jaroslav Pilunskyi, initiator of the project and head of the “Yellow Bus”.

The work of cinematic “The Summer peace camp” for talented children from the combat zone cities of Donetsk and Luhansk regions began in late of July. The initiators and organizers of the Summer cinema camp – volunteer cultural and educational project “Yellow Bus” and NGO “New Donbass” with the financial support of the Igor Iankovskyi Foundation “Initiative for the Future”.

Participants of the cinema camp steel 46 pupils aged from 10 to 16 years old. They were selected in the contest, which the initiators of the “Yellow Bus” was organized in the Marjinka village, Krasnogorovka and the other villages of Lugansk, in May of this year. For the two weeks in the “The Summer cinema camp of peace 2016” highly qualified specialists in film production conducted for school children a series of workshops on basic cinema professions: directing, acting and cinematography, make-up, costume and installation.

The “Yellow Bus” is a volunteer cultural and educational project that aims to patriotic education of youth, to develop interaction between children from the areas of peace and of the combat areas, professional orientation of students and the organization of the creative development of children’s language of film-plots. The team of the “Yellow Bus” is a professional in the field of cinema, theater, music, fine arts and other creative professions.