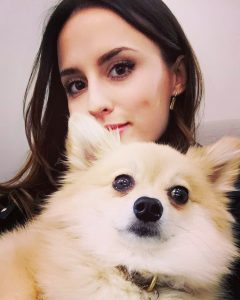 The former Made in Chelsea star is seeking to raise £10,000 for the animal rights charity using an online money pot on Leetchi.com.

This latest campaign comes just seven months after Lucy stripped down to her underwear for a raunchy campaign to encourage people to ditch their feather bedding.

Lucy’s passion for animal rights has seen her becoming closely involved in PETA, but this is the first time she’s sought to proactively fundraise for the charity. In a campaign video filmed in her home, Lucy explains why she wants to get more “hands-on” in the fight against animal cruelty. She also recently lost her family pet cat Phoebe, aged 17, on Valentine’s Day.

100% of the funds raised will go to PETA to support and its activities.

People who share the post and use the campaign’s hashtag #LWfundraiser can be in with a chance to win prizes from one of Lucy’s line of cosmetics, Basic Bitch. On the 14th of March there will be 3 winners chosen at random from Twitter and Instagram social media platforms.

Leetchi.com is an easy, fast and secure online fundraising platform that allows anyone to create a ‘money pot’ in less than a minute and invite others to help finance creative projects, raise funds for charities and individuals in need, as well as buy group gifts (for birthdays, baby showers and co-workers leaving dos).  Leetchi.com has some of the lowest fees, when comparing to other online money collection platforms. It is completely free to create a money pot and launch a campaign.

Céline Lazorthes, CEO and founder of the Leetchi Group, comments; “We’re very proud to be supporting Lucy’s campaign initiative to raise awareness and funding for PETA. We believe that enabling everyone to make online donations to worthy causes should be easier and more accessible for everyone.”

Mimi Bekhechi, Director of International Programmes, PETA said: ‘Lucy is a true friend to animals. She doesn’t just talk the talk but also walks the walk by refusing to buy into industries that hurt animals – whether it’s taking a stand against fur because she knows that minks go crazy inside tiny cages on fur farms, ditching down so that geese’s feathers aren’t ripped out by the fistful for a coat or duvet, choosing make-up that hasn’t been dripped into the eyes of terrified rabbits, or eating vegan meals to prevent cows, pigs, chickens, and other animals from suffering and dying for her dinner.

We’re incredibly grateful to have the support of Lucy and caring people like her, who are the beating heart of PETA. It’s only through their generosity that we can continue to release eyewitness exposés revealing what happens to animals out of view of the public on factory farms and in abattoirs, work with companies to implement animal-friendly policies, invest in humane, cutting-edge science in order to replace archaic animal tests, and provide people with resources to enable them to make informed choices that help – rather than hurt – animals. We’re committed to making the world a kinder place for all living beings, and we won’t relent until all animals are able to live free from abuse. With more people supporting us and donating, we can make that day come a whole lot faster.’

Leetchi.com, the leading online money collection site with more than 7 million users in 150 countries and a team of 70 employees. The Leetchi Group has helped raise more than €400million in 2016.

The Leetchi Group offers high quality, innovative money solutions via the commercialisation of its MANGOPAY API, developed to answer to the strong market request for C2C payments. MANGOPAY is a provider of payment solutions dedicated to collaborative players such as marketplaces and crowdfunding platforms, and currently services over 2,000 client platforms across Europe.

Today, Leetchi.com is available in four languages: French, English, Spanish and German, and people can contribute to a money pot from over 150 countries.

PETA was founded in 1980 and is internationally recognised as one of the leading and most influential animal charities in the world. They focus on campaigning against issues of animal cruelty that include topics such as factory farming, fur farming & animal testing. Any issue that involves animal cruelty is on PETA’s radar and you can be rest assured that they will do everything in their power to put a stop to it.

By campaigning regularly all over the world, they not only attract attention, but encourage people to educate themselves on topics they may not be aware of. They have created and continue to support a movement of compassion towards animals, one that is only growing stronger by the day.

Céline is a founding member of France Digitale, an active business angel and a regular speaker on entrepreneurship and FinTech, including Wired Money (London), Money 2020 (Copenhagen) and The Next Web (Amsterdam).