It is to be noted that the project “Watch Ukrainian – create your future!” and “OWN CINEMA” contest is being realized on charitable basis, by means and efforts of philanthropists. The prime sponsor of the project is National Charity Foundation “Initiative for the Future” that is constantly and extensively supporting the project during the whole period of its realization. 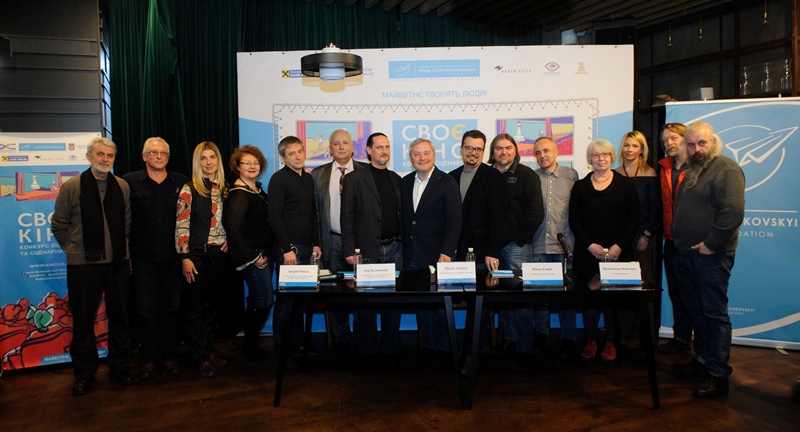 port of talented creative youth in arts, cinema, innovations. Those young talents will be able to build new, modern and competitive Ukraine, while the cinema is universal, lucid and comprehensible tool for achieving this important mission. The project “Watch Ukrainian – create your future!” represents an innovative approach to the creation of short films dedicated to actual issues of Ukrainian society, to rethinking of traditional values and forming of the modern ones. In order for each citizen of Ukraine to feel as part of the whole, he should receive an informational impulse and a clear message. I’m confident, that the short films, created by dozens cinema makers under this project will allow not only attract the new audience to the cinema theaters, but will also contribute to the reuniting of our society with one mission – to build happy future for Ukraine!”.

The contest went through two-stage selection process: after the submission deadline (22.01.2017), a jury comprising 16 experts selected 100 best works among 412 that passed the moderation. Then, a broader jury of 84 experts has chosen the winning scenarios, which will be proceeded for realization. The authors of these scenarios will receive author’s remunerations.

“OWN CINEMA” scenario contest has been looking for scenario about success-stories in any domain or level. Stories, that are inspiring to follow a proactive creative path. The main selecting criteria was the presence of a life-affirming plot that underlines the capabilities of every person to generate the changes for the better – the underlying concept of the whole project “The future is created by people!”.

Andriy Rizol, Board Chairman of the Association “Cinema development support – Watch Ukrainian!”, CEO of the “Vavilon” company and initiator of the “Watch Ukrainian – create your future!” project: “This is a social and charitable project, developing by support of philanthropists and partners who share the mission and core values of the project. The main question we had to answer was: what do we want to shoot cinema about?! What exactly do we want to show to the audience?! We elaborated the themes for the contest (for more information visit http://www.kinoua.org) around life-affirming stories that inspire and empower people to change the future by their own hands. We would like our movies to transmit a positive and inspiring message in artistic form, but putting the spectator’s interest to the first place and subsequent reflections – to the second”.

The initiative has been supported more than by 100 cinema industry experts, representatives of cinema theaters and socially-responsible businesses, media, well-renown creative personalities (contest’s jury comprised 84 experts). Given the mode of the expert jury assembling, tending to involve as many cinema and related experts as possible, the contest’s Organizing Committee has broaden the possibilities for recognition by initiating additional distinctions for participants.

In addition to the personal distinctions, a Reserve Pool of prospective works to be considered under other events of “Watch Ukrainian – create your future!” initiative has been created under the project. These works have formed a list, recommended by the broad jury expert group for further cooperation under the project. The project’s Organizing Committee would provide a comprehensive support in search for the possibilities to realize the scenarios.

A number of works has been also awarded with Special Distinction Prize by the members of the “OWN CINEMA” scenario contest’s jury and “Watch Ukrainian – create your future!” project’s experts. “OWN CINEMA” scenario contest’s expert jury, basing on the overall high rating, recommended the following works to be awarded with the special distinction prize. These authors receive additional incentive amounted to 5000 UAH.

Finally, the “OWN CINEMA” scenario contest’s main results are great. To recall, the jury had to choose the best 20 works for subsequent realization among 501 submitted for the contest. Their authors will receive author’s remunerations amounted to 10 000 UAH (accordingly to the official Contest Protocol). Contest’s Winners – #1 Short movie “Kloun” / The Clown by Vasyl Kukhar and #20 short movie “A Day in the Life of Prime-Minister” by Sofiya Stolyarova.

With the scenario contest’s achievement, “Watch Ukrainian – create your future!” project is entering into the next stage – screen adaptation and realization of winning scenarios for subsequent diffusion among cinema theaters and TV channels. The first movies are projected to appear on the screens in November 2017.

The project is also backed by the State Film Agency of Ukraine and sponsored by “Raiffeisen Bank Aval” and “Baker Tilly Ukraine” company.

Volodymyr Lavrenchuk, Head of “Raiffeisen Bank Aval”, artist, philanthropist, and project’s partner: “In supporting this project, “Raiffeisen bank Aval” reiterates its commitment to the durable development and prosperity of Ukraine and long-term strategy. The success of such long-term projects as “Watch Ukrainian – create your future!” is very important to us. The project is truly outstanding taking into account its substance and the scope of opening possibilities. It is also partially intertwining with the longstanding Raiffeisen Bank’s motto in Ukraine: “Birds of feather flock together””.

Official media platforms of the Project: