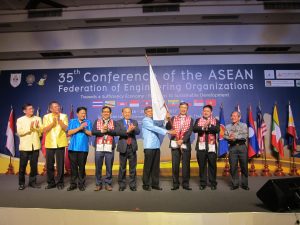 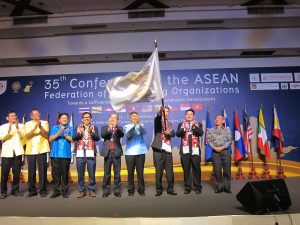 The two projects who received the esteemed ASEAN Outstanding Engineering Achievement Awards 2017 are:

Presented by the ASEAN Federation of Engineering Organizations (AFEO), a non-governmental organisation affiliated to the ASEAN Secretariat, the annual awards pay tribute to the most distinctive engineering projects in the region. The Singapore projects were selected for making significant contributions to advancing engineering and improving quality of life amongst the ASEAN countries.

At the ceremony, AFEO also conferred four eminent Singaporeans with the AFEO Honorary Fellowship title, for rendering exemplary and meritorious services to the engineering profession, IES and Singapore. They are:

In conjunction with CAFEO35, IES also signed a Memorandum of Understanding (MoU) with the Asian Institute of Technology Thailand, to enable cooperation in promoting capacity building and project development in climate change through joint activities.

Both parties kicked off their collaborative partnership by signing a Memorandum of Agreement (MoA) to deliver a professional development workshop on ‘Managing Project Preparation for Climate Change Mitigation and Adaptation’. Targeted at senior level officials and executives responsible for climate change and mitigation projects, the workshop aims to deepen understanding and skillsets in project proposal preparation to facilitate acquisition of financing from the growing pool of climate resources in the region. The inaugural workshop will be held in Singapore in 2018.

This MoU represents another significant step forward in IES’ continuous efforts to strengthen global resilience towards the impact of climate change through engineering. Since 2013, IES has held the World Engineers Summit every two years in Singapore, to facilitate engineering-led discussions amongst the world’s engineering communities, to drive global climate action and sustainable urban development.

At the conclusion of CAFEO35 on 18 November 2017, IES officially took over the AFEO Chairmanship, with a key role to host CAFEO36 in Singapore in November 2018. In alignment to the Master Plan on ASEAN connectivity 2025 and Singapore’s assumed role as ASEAN Chair in 2018, IES will focus CAFEO36 on enhancing rail connectivity and fostering excellence in engineering education.

“IES is excited to assume the Chairmanship of AFEO for 2018 as it coincides with Singapore’s role of ASEAN Chair. We aim to make CAFEO36 into a focal point for exchange of knowledge, standards and best practices in engineering amongst member countries, to support the development of a seamlessly and comprehensively connected ASEAN. Through CAFEO36, we also hope to spur greater engineering contributions towards infrastructural development in ASEAN and promote a strong collaborative engineering community,” said Er. Edwin Khew, President, IES.

IES led a contingent of engineering representatives to attend CAFEO35 in Bangkok from 16 to 18 November 2017. Since 1982, the annual CAFEO has been hosted in different ASEAN member countries to promote goodwill, understanding, cooperation and exchange of ideas and experiences in the fields of education, science, engineering, technology, environment, human resource, training and registration of professional engineers.

About The Institution of Engineers, Singapore (IES)

The Institution of Engineers, Singapore (IES) was formally established in July 1966 as the national society of engineers in Singapore. IES is the premier engineering institution in Singapore and is called upon by the Government to provide feedback on professional engineering matters.

IES is well represented among the faculty members of the major engineering institutions of higher learning in Singapore. Through close collaboration with the local universities and polytechnics, IES organises courses, seminars and talks for engineers and IES members to advance the continuous development of engineers.

The Institution maintains close links with professional organisations of engineers regionally and throughout the world. These include organisations in Australia, China, Japan, United Kingdom and the United States. The Institution also represents Singapore in the ASEAN Federation of Engineering Organizations (AFEO) and the Federation of Engineering Institutions of Asia and the Pacific (FEIAP) in promoting goodwill and fellowship among all engineers in ASEAN and the Asia-Pacific region.

Through its Engineering Accreditation Board (EAB), IES obtained full signatory status in the Washington Accord (WA) in June 2006. The entry grants IES the authority to represent Singapore, the first country within the ASEAN region which has obtained full signatory status in the WA, to vet education systems under the WA mutual recognition framework.