LONDON, Great Britain, 2019-Jul-15 — /EPR Network/ — Japan, Taiwan and Singapore share top spot in the most recent research of international cognitive ability, the most extensive work published since 2012. The three regional powers registered an aggregate score of 106, two points ahead of China (104). 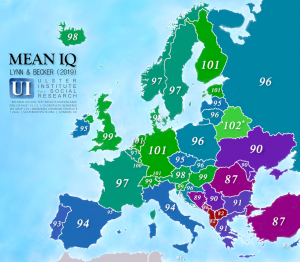 Elsewhere, North America’s highest national IQ was obtained by Canada (100), significantly clear of the United States at 97. Suriname topped South America’s podium with an average IQ of 90, while Australia and New Zealand shared Oceania’s honors at 99.

Critically, a major finding was a lower standard deviation between the scores of the 203 countries and regions studied, indicating a decline global IQ inequality. The largest gain was made by Caribbean state Haiti, whose new score of 82 is an increase of 15 points from the 2012 index and places it at the global average along with Afghanistan, Albania, Dominican Republic, Lebanon, North Macedonia, Philippines, Puerto Rico and United Arab Emirates.

Retired Professor of Psychology and IQ expert Richard Lynn joined political scientist David Becker of Chemnitz University of Technology to conduct the most rigorous meta-analysis of IQ studies ever; identifying and controlling for various technicalities in testing diversity used over decades of research.

Lynn explained that the lack of stable datasets for some countries remains the greatest limitation to a holistic international IQ index, while also acknowledging the deterioration of statistical reliability for intelligence testing at the lower margin. A staple of intelligence testing comes from internationally standardized school testing: PISA, TIMSS and PIRLS, for which some countries do not participate in, or keep results private.

In response to criticism of previous editions, Lynn and Becker imposed stricter data quality admittance in the interests of overall model coherency, though this came at the expense of a small minority of countries whose reported average IQs are implausible and are likely to remain turbulent pending new data. For this reason Lynn and Becker adjusted the scale to have minimum cutoff point of 60.

Lynn and Becker’s findings, published by London’s Ulster Institute for Social Research, are presented in a 475 page volume entitled “The Intelligence of Nations,” which also delves into the correlations of national IQ with various metrics like educational attainment, GDP, level of democracy, happiness, health/nutrition, religiosity and fecundity. For instance, results from the PISA and TIMSS school tests had a remarkable .97 correlation with educational attainment, whereas school results had a very low correlation of .19 with educational expenditure.