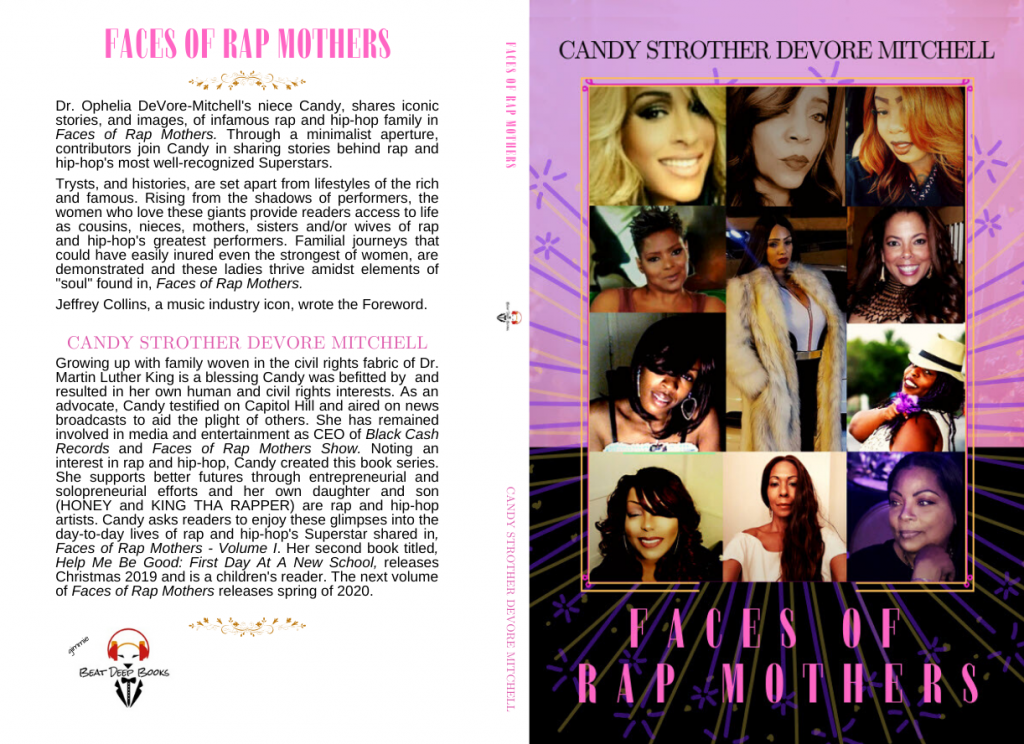 Faces of Rap Mothers, by Candy Strother DeVore Mitchell, is a book about the women involved in the lives of rap and hip-hop’s superstars. As a compilation of works – this title includes back stories from women who have supported rap and hip-hop artists dating as far back as the 1970’s. Surprisingly, in the compilation, when revealing the history of the development of rap and hip-hop’s legendary artists – predominantly from the West Coast, we learn unlike the Italian-American crooners of the 1930’s to 1950’s who appeared slated to excel through their Italian heritage and its influence on media during their era . . . these rap and hip-hop artists literally sprang up among localities in an unplanned fashion – no one was pulling strings to ensure these artists reached epic results. Yet, the rap and hip-hop community, developed with a strong camaraderie where the performers happenstance into each others lives.

This fact, along with a host of others, makes Faces of Rap Mothers an intriguing read. On its face (no pun intended) the title sounds like a fan publication sharing factoids using the superstar’s status as an integer or hook to ignite sales. In actuality, the title delivers background on the origins of rap and hip-hop, tells intimate stories of the women who support the industry’s icons, and shares unique information, such as where The Jackson Five practiced and learned to play instruments, sing and dance. Most interesting is how this group of successful artists rose from all over the country, grew to know one another – typically while not famous – remained loyal as friends and associates to this day and reached goals that rose from parallel silos almost simultaneously without necessarily interacting in regard to achievement of their successes. A sense of fate results that turns the ideology of the formation of rap and hip-hop on its head. Certainly, the backstories didn’t map to what this reviewer anticipated. This is a book that is worthy of purchase and review, especially if you are a fan of the genre.

Faces of Rap Mothers is made available through the Beat Deep Books Imprint of publisher DonnaInk Publications, L.L.C. at https://www.donnaink.com in an assortment of formats, as follows:

Through AMAZON, Faces of Rap Mothers is available in the following format:

Through Barnes and Noble, Faces of Rap Mothers is available in the following formats:

For bulk orders, write to contact@donnainkpublications.com – in your email, identify the number of books you desire, and an invoice / purchase order will be remitted to your attention using industry-standard reductions from retail cost. Once it is received, remit payment and the order is processed same day until 6PM EST and next a.m. after 6PM EST.

Shipments from AMAZON and B&N may take a shorter amount of time – typically AMAZON is faster than B&N. However, their retail rates are higher. DonnaInk Publications, L.L.C. sells the title at discounted rates that are closer to wholesale and to match large distributor shipping speeds expedited shipping costs should be indicated by readers at checkout for additional cost. Of course, hardly anyone beats AMAZON’s overnight processing and billion-dollar overhead budget; however, where a reader likes to save money and can be patient a few additional days . . . DonnaInk Publications, L.L.C. is the most cost-effective purchase.

CDs are in development, which go together with these titles, and though not yet released through the publishing house, they are soon to be made available at DonnaInk Publications, L.L.C. and AMAZON.

Write to: contact@donnainkpublications.com and input “special markets” or “Faces of Rap Mothers” in the subject line.