Global Carbon Disulfide Market is expected to grow at a significant CAGR in the forecast period owing to the increase in demand for cellophane from packaging segment. Also known as, carbon bisulfide, carbon disulfide is a transparent, flammable, volatile and toxic liquid chemical. The chemical has wide industrial applications in manufacture, rubber rayon, cellophane, electroplating, metal rust removal, and plywood. It is also used in agriculture as a fumigant and pesticide. A significant percent of carbon disulfide occurs naturally in marshes, oceans, volcanoes, wetlands even though it is found at low concentrations as compared to industrial chemical release. Natural carbon disulfide is produced by microbes, which are adapted to low oxygen settings.

Carbon disulfide is extensively used as an accelerator in rubber vulcanization process, in manufacturing of cellophane film and viscose rayon. The chemical is a valued intermediate in chemical synthesis of carbon tetra-chloride, organosulfur compounds like xanthates, metam sodium, dithiocarbamates, which are widely used in extractive rubber and metallurgy chemistry. Carbon disulfide is also used in fumigation of airtight storage containers. The chemical has also found applications as an insecticide for the fumigation of nursery stock, grains, preserving fresh fruits and as a soil disinfectant.

Growing demand for cellulosic fibers and cellulose from several industries are the major driving factors of carbon disulfide market. The rising cost of raw materials and the application of chemicals in the production of mining chemicals is gaining popularity and is expected to grow significantly in future. The increase in demand for rayon and other fibers from the fabric and textile industry is predicted to drive the market. 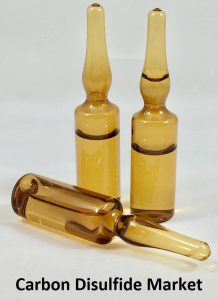 The market is categorized on the basis of applications, and geography. On the basis of application, market is divided into rubber, fiber, rayon, agriculture, packaging, pharmaceutical, food, and others. Agriculture segment registered maximum growth in the previous years, owing to extensive adoption of the compound in pesticides and fertilizers. At present, packaging industry is predicted to lead carbon disulfide market due to the rise in demand for packaging material.