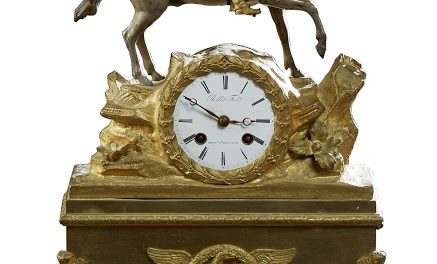 The Important Summer Estates Catalog Auction features more than 700 quality lots in a variety of collecting categories. Start times both days are 10 am Central. The gallery, at 1330 St. Charles Avenue in New Orleans, will be open for exhibition beginning Thursday, June 4th, from 10-5, by appointment only (excluding Sunday). A live Saturday preview will be held on June 4th, from 9am to 1pm, also by appointment only. To schedule an appointment, you may call 504-529-5057 or email info@crescentcityauctiongallery.com.

The early 20th century oil painting by Jean-Baptiste Armand Guillaumin, titled Coastal Landscape, measures 15 inches by 22 ¾ inches and carries an estimate of $20,000-$25,000. The 19th century work by Theodule Augustin Ribot is titled Harlequin in a Landscape, Holding a Bunch of Flowers. It’s 17 ½ inches by 14 inches and is expected to finish at $3,000-$5,000.

With a pre-sale estimate of $25,000-$35,000, the platinum engagement ring is a candidate for top lot of the auction. Flanking the 3.83-carat emerald-cut diamond are two tapered diamond baguettes. The size 5 ¼ ring boasts grades of Color-I and Clarity-VS-1, and it’s accompanied by an official GIA report. The auction also features other platinum and gold estate jewelry pieces.

Clocks and other timepieces will include a 20th century Arnex Reuge pocket watch with music and an automaton, in working condition (est. $800-$1,200); and a 19th century French gilt bronze Napoleon on horseback figural mantel clock by Vincenti & Cie (est. $600-$900).

French furniture pieces, a staple at most Crescent City auctions, will be plentiful and will feature the following:

Internet bidding will be provided by the platforms LiveAuctioneers.com, Invaluable.com, BidSquare.com. Absentee and phone bids will be accepted up until 1 pm Central time on Friday, June 12th. A printed catalog is available; call 504-529-5057 or e-mail info@crescentcityauctiongallery.com.

About Crescent City Auction Gallery:
Crescent City Auction Gallery is always seeking quality consignments for future auctions. To consign a single item, an estate or a collection, you can call them at (504) 529-5057; or, you can send an e-mail to info@crescentcityauctiongallery.com. All phone calls and e-mails are confidential. For more info, visit www.crescentcityauctiongallery.com.