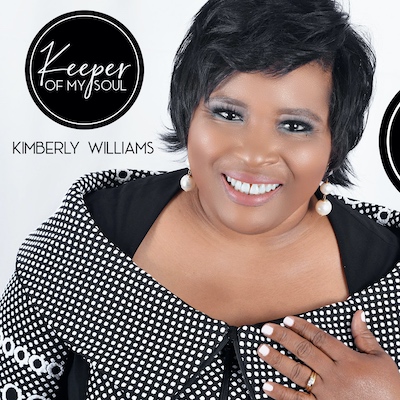 New York, USA, 2020-Sep-22 — /EPR Network/ — An anonymous spokesperson from the KWilliams Music record label has now confirmed previously unconfirmed rumors that crossover Gospel and Adult R&B artist Kimberly Williams has released her latest single titled “Keeper of My Soul”. Kimberly has been nominated for 3 Gospel Choice Music Awards (Artist of the Year, Female Vocalist/Artist of the Year, and CD Project of the Year, and was awarded Female Vocalist/Artist of the Year 2019), performed last year at the GMCA show, and has also been nominated for the Showtime ENT Gospel Music Awards in the past. So, this announcement yields yet another gem that will be added to an already heavy crown of accomplishments for this Christian contemporary recording artist.

Ms. Williams, originally from Mississippi where she was raised by her grandparents, has been working and residing in Birmingham, Alabama, since 1998. Even before that relocation to Alabama spiritual music has always been a vital part of her life. After years of working and collaborating with others in the industry, Kimberly released a highly acclaimed solo EP called “Testimony”, which featured the single “I Run to You”. Both secular, as well as non-secular radio stations, added that release to their station rotation playlists, keeping it in rotation for quite a while.

From the church choir to some of the world’s most famous sound stages this woman of God has sought to do good with the God-given gifts and talents she recognized within herself during her early childhood years. While all Christian music or Gospel music has a positive message, Kimberly Williams’ music offers a positive message which she hopes will stir the soul. A message of hope, love, and compassion that most of us feel is so very lacking in the world today. With “Keeper of My Soul” Kimberly was proud to have collaborated with Pastor Jeremy Wallace on this project for the arrangement of this song.

A North American radio and press campaign has already been launched to promote “Keeper of My Soul”. Adult R&B and Gospel radio broadcasters have already been serviced with Kimberly Williams’ current single as has entertainment publications from north to south and coast to coast. Her music is available on most major retail and streaming platform sites. Additional personal appearances will be announced in the upcoming weeks. Ms. Williams’ press kit will be provided upon request to all members of the media by contacting the representative listed below. She is presently available for interviews and/or appearances. Additional news, updates, and other information about upcoming events may also be found at https://www.kimberlywilliamsmusic.com