The hydroponics market size is estimated to account for a value of USD 9.5 billion in 2020 and is projected to grow at a CAGR 11.9% from 2020, to reach a value of USD 16.6 billion by 2025. Factors such as the higher yield as compared to conventional agriculture practices, controlled environment farming, and improved yield and higher produce with limited land resources, are some of the key factors driving the growth of the hydroponics market during the forecast period. 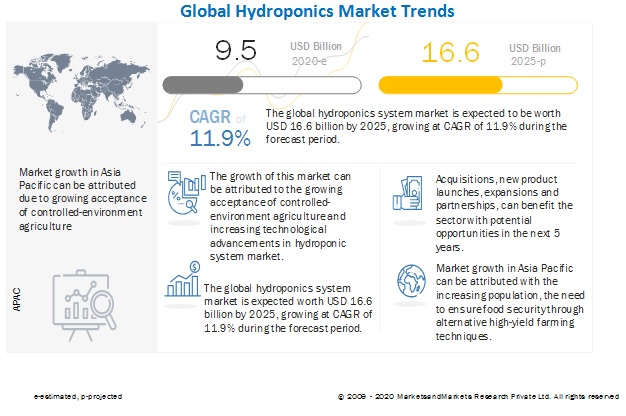 Amid the spread of Covid-19 pandemic, many individuals have developed a critical point of view towards outdoor food. With health and food safety becoming the key focus, the populations around the globe have showed an inclination towards home cooking and self-made/homemade meals. This has put the food and hotel industry into jeopardy. After the devastating outbreak of coronavirus pandemic, the adoption rate of urban hydroponic farming systems around the world are estimated to rise sharply. The agriculture industry faced challenges during the initial phases of the spread of the pandemic. There were huge labour shortages on the farm, some farmers missed their window of opportunity for harvesting for seasonal crops, the falling prices of agricultural products and the disruption of logistics. Many countries also realized their over dependence on imports of food materials and hence began emphasizing on internal and domestic productions.

Driver: Higher yield as compared to conventional agriculture practices, emphasized even more after the outbreak of Covid-19 pandemic.

According to the UN reports on global population, plants grown in hydroponic systems have achieved 20%–25% higher yield than the traditional agriculture system, with its productivity being 2–5 times higher. Also, owing to controlled environmental conditions, the effect of climatic changes can be balanced with the help of these systems, thereby not affecting the annual crop production. CEH techniques directly affect the crop harvest cycle. Since climatic changes show a minimal effect on such systems, crops can be produced all year round, thereby again increasing the produce.

Different types of equipment including HVAC systems, fans, ventilation, irrigation systems, control systems, rails, and lights are the key cost factors in a hydroponic farm. On average, a 500 sq. ft. hydroponic farm can cost up to USD 110,000 for a base level system that is not fully automated. This huge cost for the initial set up of the system is a major factor refraining farmers from investing in these systems. However, the yield obtained from these systems are higher, and the produce can also be marketed as premium products, thereby raising the ROI for growers.

With the increased adoption of hydroponics globally, manufacturers and researchers are working on improving the efficiency of hydroponics technology to increase the quality and quantity of the produce. Many companies in the market are investing heavily into R&D for obtaining state-of-art technologies that boost he porductions asnd also brong about variety of ciultivations possible. Startegic partnerships with research labs and institutes further drive the growth of the market.

Challenge: Spread of waterborne diseases and algae in closed systems

Key players in this market include include major players such as Signify Holdings (Netherlands), Argus Control Systems (Canada), Heliospectra AB (Sweden), Scotts Miracle Gro (US), American Hydroponics (US), LumiGrow (US), Emerald Harvest (US), Hydroponic Systems International (Spain), Advanced Nutrients (Canada), Vitalink (UK), Hydrodynamics International (Spain), Logiqs B.V (Netherlands), Grobo (US), and American Hydroponics (US). These major players in this market are focusing on increasing their presence through expansions & investments, mergers & acquisitions, partnerships, joint ventures, and agreements. These companies have a strong presence in North America, Asia Pacific and Europe. They also have manufacturing facilities along with strong distribution networks across these regions.

Asia has the largest greenhouse vegetable growing area of 224,974 ha across the globe, followed by Europe with 173,561 ha as per the report on protected horticulture by FAO in 2017. Thus, with the high number of greenhouses in Asia Pacific, the growth opportunity for hydroponic market is the highest and hence, the region is expected to grow at the highest rate during the forecast period.