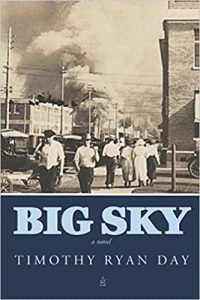 One of the most violent chapters in American history is also one of the least discussed. BIG SKY aims to illuminate the events of the Tulsa race riots in a modern, high-paced story that combines historical fiction, magical realism, and a fresh voice. BIG SKY follows its main character, an unsuccessful rock musician of mixed race from Chicago, as he hitchhikes to his stepmother’s funeral in Tulsa, Oklahoma soon after the beginning of the new millennium. The story that unfolds as he makes his way is one of two families, one white, the other black, who were tied together by the events of Tulsa’s 1921 race riots. One family followed an industrial and political path that may be endangered by the other’s artistic and journalistic pursuits that emanate from a grandfather who was one part Heidegger, one part Nostradamus, and one part James Baldwin. The main character is followed on his journey South by a brilliant if sinister biologist who may have the key to their interconnection.

Timothy Ryan Day was born in Tulsa, grew up in Chicago and lives in Spain where he teaches writing and Literature at Saint Louis University. He has taught at Universities in China, Arizona and Spain. Along with his wife he runs restaurants in Madrid that focus on local products and literary events. His work has appeared in forums such as Green Letters, The Nervous Breakdown, and The Toucan, among others. His poetry collection Green & Grey was published by Lemon Street Press in 2019. He has a book on Shakespeare and Ecocriticism scheduled for publication by Routledge in 2020.

For information regarding this title and its Author, or any other title by Adelaide Books, or to receive ARC reviewers copy of this book, please write to office@adelaidebooks.org.