The molluscicides market is estimated at USD 587.8 million in 2018 and is projected to reach USD 727.8 million by 2023, growing at a CAGR of 4.4% during the forecast period. The key players profiled have a strong presence in the global molluscicides market. These include Lonza Group (Switzerland), Bayer CropScience (Germany), American Vanguard Corporation (US), BASF (Germany), and Adama Agricultural Solutions (Israel).

The key market players adopted various growth strategies such as expansions & investments and mergers & acquisitions to cater to the increasing demand for molluscicide products and to expand their businesses. The companies in this market are increasing their investments in R&D to focus on developing new agrochemicals with an idea of developing molluscicide products that are less harmful to the environment than the existing chemical molluscicides. The companies are also focusing on expanding their geographic presence by increasing their production facilities. 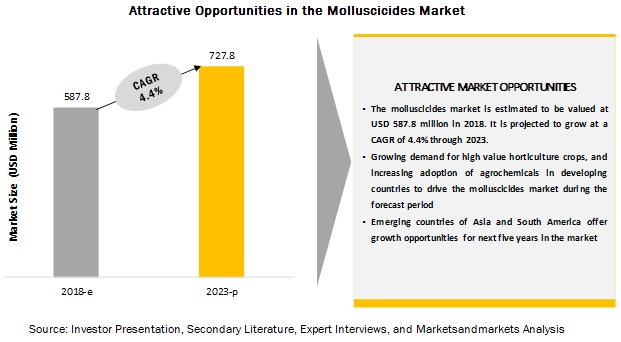 The companies are also investing in new technologies to create new molluscicide products to be used in various applications such as molluscicides for residential purposes and for turf and ornamental applications categorized under non-agricultural application of molluscicides. Companies such as BASF (Germany) and De Sangosse (France) are expanding their product portfolios by innovating new products. BASF (Germany), in May 2017, introduced new biological molluscicides, Nemaslug and Nemasys powder, which contain nematodes.

Companies are also expanding their global presence by establishing new offices and production facilities and by entering into an agreement with other global players. In September 2018, Lonza Group (Switzerland) established a new production facility of specialty ingredients, which include some of its molluscicide product offerings as well, in Greenwood, SC, US; hereby expanding its production capacity. In March 2016, Lonza Group (Switzerland) and Nulandis (South Africa) signed a strategic distribution agreement to launch Axcela slug & snail pellet in South Africa.