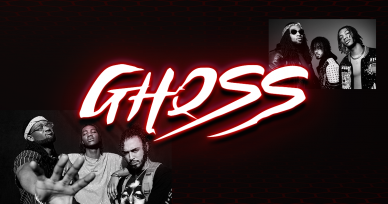 Atlanta, GA, 2021-Feb-23 — /EPR Network/ — A true testament to the power of synergy, Ghoss is the collective brainchild of recording artists Major Myjah, TuGun Cannon and Deion Gill. While working on their individual careers in music, with each lending their respective songwriting talents to a variety of legacy artists over the years (among other notable solo achievements), it became only a matter of time for the destined trio to cross paths.

Although the group was acutely aware of the other’s endeavors previously, it wasn’t until 2017 that circumstance would bring Major, TuGun and Deion together in a manifested capacity, with the three even crashing under the same roof in Los Angeles. At the time, Major and TuGun were working on material for Chris Brown’s Heartbreak on a Full Moon (co-writing the opening single “Lost and Found”), leading them to extend an open invitation to Deion, whose credits include penning songs for artists such as Usher, Miguel, French Montana, T-Pain and more. At home in the studio, the environment allowed them to connect with one another on a deeper level, and the parallels in their artistry, passion and overall lifestyle as creatives soon became hard-pressed to ignore. At the beginning of their undeniably fated friendship, the group found a common ground in writing for other artists, with their innate love for collaboration helping lay a strong foundation for what would later culminate as Ghoss.

The convergence of their different backgrounds, influences and talents caught the attention of fellow producers and renowned executives alike, creating the framework for a collaborative project to surface in a serious, tangible fashion. Thanks to the early encouragement of Caston Grigsby and Donnie Meadows, the group went on to sign with Starr Island Group, releasing their debut project as a trio in October 2018. The nine-track offering, This Is A Mixtape, featured a collection of reworked tracks, such as their take on Jaden Smith’s “Ghost” and Drake’s “In My Feelings,” serving as taste of what’s to come as they began readying new original material. Additionally, the group paired their inaugural mixtape with an accompanying music video component for each song, showcasing the multifaceted nature of their craft and shared aptitude for giving heartfelt performances outside of the comforts of the studio. Soon thereafter, Ghoss found themselves at the center of a major label bidding war, going on to ink a deal with Atlantic Records in 2019.

They’ve teamed up for management with veteran music executive Jullian Boothe of Fast Life Entertainment. Jullian mentioned “Ghoss is three superstars wrapped into one group. Each member brings so much talent”.