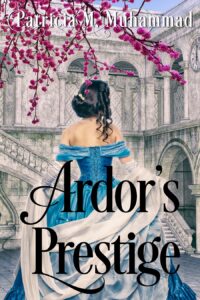 New York, NY, 2021-Apr-20 — /EPR Network/ — Multi-genre fiction author, Patricia M. Muhammad has published her third historical romance novel.  Ardor’s Prestige is a historical romance novel set in 18th century Venice city-state.  It involves Duchessa Anastasia who steals away from her esteemed House in the middle of the night.  She thinks she is alone as she contemplates what is next for her aristocratic life.  However, her thoughts are disrupted when a handsome courtier appears.  They question each other as to why they are present, easily noting each other’s status.  Both are reluctant to divulge details of their identity.  Duca Leandro escorts her home, promising not to remember where she lives.  The duchessa’s family leave for an extended stay elsewhere, leaving Anastasia, who is now of age, alone–but she isn’t.  Giorgio, her devoted cavalier servante and a senior servant of the house keep close watch of her comings and goings.  She is admittedly intrigued by Leandro.  They begin a courtship, they become better acquainted.  Giorgio is suddenly apprehended by royal authorities by order of the Crown for treason.  He, seeing that his hopes of having Anastasia in his life has ultimately become nil, is too weak to deny the charges levied against him.  The duchessa is repulsed by Giorgio but is also sympathetic.  She continues to court Leandro.  Giorgio is eventually cleared.  The Crown holds a grand gathering.  It is the season of Carnevale.  A near murder takes place.  Duchessa Anastasia realizes that a conspiracy to disrupt her life originates closer to her than she knew.  She and Leandro only wish to be wed, but they must unravel the root of the connivance–and they do.

Where to Buy Ardor’s Prestige:

About the Author (“About Us”):  Patricia M. Muhammad is a multi-genre fiction author who often incorporates interracial relationships and multi-racial characters as a part of her storylines.  She has currently written 20 novels.