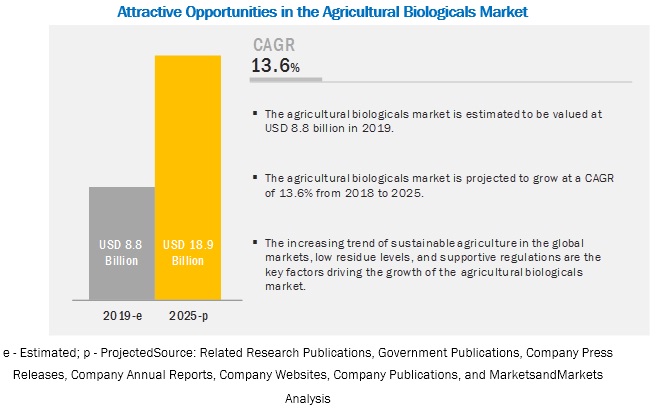 By function, the biocontrols segment is projected to be the fastest-growing segment in the market during the forecast period

Biocontrol is a broad term that includes biopesticides, bioinsecticides, biofungicides, and bionematicide. Major players in the market include biocontrol products in their product portfolio to cater to the increasing demand for biocontrol globally. The increased instances of pest infestations on major crops, such as wheat, rice, corn, and sugarcane, is one of the key factors for the dominance of biocontrol products in agricultural biologicals market. Biocontrol methods are cost-effective, unlike their chemical counterparts, and are effective in micro quantities.

By product type, the microbials segment is projected to dominate the market during the forecast period.

The availability of strains, ease of production, and a higher rate of adoption among farmers are some of the drivers leading to the dominance of microbials in the agricultural biologicals market. The use of microbials does not need the user to have specific technical knowledge and high-end distribution logistics such as macrobials. This factor has led to a higher acceptance of microbial solutions than any other type of agricultural biologicals among growers.

By mode of application, the foliar spray segment is projected to be the fastest-growing segment in the market during the forecast period

The foliar spray is the most adopted way of applying biologicals to the plants in 2018. This is attributed to their ease of use and effectiveness. The foliar spray directly affects the leaf, which helps in the easy absorption of nutrients and trace elements. Small farmers in the Asia Pacific region generally prefer foliar sprays over soil treatment due to their cost.