New York City, NY, 2021-May-17 — /EPR Network/ — American fiction author Patricia M. Muhammad publishes her second mystery/detective romance novel, Murder By Dissent.  It features a major explosion, an interracial marriage and some determined detectives set to resolve a few murders in the midst of the Civil Rights protests of the 1960s.  Here’s a bit more about the story:

Lieutenant Davidson assigns a black female detective by the name of Jacqueline Sadie Thompson, to work a few homicide cases with her station house partner, Sebastian Johnson.  They get on well.  T 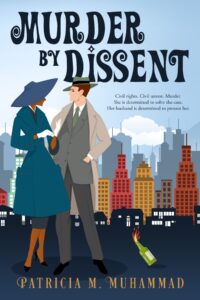 hey have similar views about race and relationships.  Jacqueline is married to an Englishman.  Sebastian is their ally when it involves racial politics, but he is also their friend.  The 1960s had its share of turmoil and soon enough, Jacqueline and Sebastian would see how the irrational and hateful opinions of others would interfere with their lives.  Nevertheless, they decide to visit the scene of their homicide cases.  Jacqueline’s husband, William breaches her work protocol.  He believes he is the only one capable of properly safeguarding his wife no matter where she is.  There is an explosion.  William saves his wife as they tumble away and onto the ground.  They are separated from Sebastian.  Jacqueline does not know whether he has survived.  She returns to work to learn her work partner is in a coma at the hospital.  soon Jacqueline isn’t feeling well either.  Her lieutenant orders her on leave.  William is right there to care for her.    Jacqueline wants to resolve the cases.  Her husband refuses to allow her to do any work at home.  They share an abundance of intimate scenes.  Eventually she returns to work and visits Sebastian at the hospital, only after enlisting the help of another colleague of the hesitant Mark.  Their lieutenant accepts the responsibility to investigate the explosion.  Theories abound.  Forensics is helpful.  The motives remain unclear beyond superficial assumptions.  Margaret’s wife had also died at that scene of the explosion.  She was shot in the back while Sebastian maneuvered to survive the falling debris.  They all seek to find out who tossed the molotov cocktail and who shot Sebastian’s wife and why?  Sebastian holds back a secret.  Jacqueline discovers some additional facts.  She still questions Sebastian for confirmation.  One death was at least justifiable and it was not either Johnson’s or Thompson’s case.  Race played a part.  After all, it was the 1960s, but all is not what it appears.  Not everything is black and white.  This is the political façade some blacks use to unjustifiably harm members of their own “race”.  Yet it will become clear as to what the motives were.  Multiple surprises await Thompson and Johnson as to whom the murderer(s) were.  Not all is black and white.  Sometimes it is the irrational “black” against an innocent “black”.  Most of the time it is envy.

Murder By Dissent* is now available for purchase as an ebook from these online retailers:

About the Author: Patricia M. Muhammad is a multi-genre fiction author. She writes in science-fiction/fantasy, fantasy, contemporary romance crossover, historical romance and mystery/detective romance genres.  Patricia often includes multi-racial characters and interracial relationships in her books. She has written 20 novels. Patricia is currently based in the United States.

*CONTENT WARNING:  Mild note: The protagonist and her husband share intimate moments-often. Although there is only mention of legs, arms, embraces and kisses, the remaining descriptions I use allegory and references to nature to describe their intimacy. This may be considered mild to moderately “Steamy” depending on the potential reader’s inclination.

Moderate to severe discretion (abridged): This book is a work of fiction. However, the author intended to create characters and settings historically accurate to the era it takes place in, the racially tumultuous 1960s. Certain terms used as racial descriptions now considered archaic, outdated or even offensive are used to reflect the past usage by both black and white Americans of that era.

Additional note: A portion of the main plot revolves a pivotal scene in which a few people are injured due to an explosion which destroys a building. This notice is to advise those who may suffer from post-traumatic stress disorder (“PTSD”) concerning traumatic events based the recollection of certain sounds or the imagery which may encompass them both.