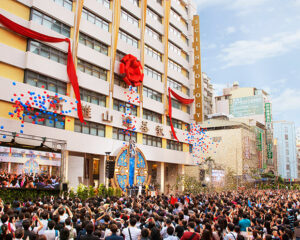 The 30 minute program, “Destination Scientology: Kaohsiung” highlights the history of Taiwan, how the city embraces its multi-faceted religious community, Taiwan’s unique culinary specialties and how the Church of Scientology assists in furthering the cultural heritage and traditions of one of the oldest civilizations on earth.

“L. Ron Hubbard travelled through Asia 1927 as a 16-year-old boy. He was introduced to the Eastern religions and philosophies and that spiritual connection is reflected today in the religious philosophy of Scientology,” said Amber Skjelset, Manager of the Scientology Information Center.

One guest, Zofia who is originally from Poland, stated after the screening, “I liked it so much, I watched it twice! I don’t know when I’ll ever be in Taiwan or have a chance to visit there – so I am happy to see this as I feel like I am travelling there. There were young people, so many religions together, festivities and help. I’d like to come again to see these ‘Destination Scientology’ episodes.”

Another guest remarked, “This show really hit me. I got emotional at some point. They spoke about the freedom of all religions. They have so many religions – and it just struck me. Taiwan was so inclusive. The people are so warm and inclusive. I could see this is where Mr. Hubbard got a lot of inspiration from Asia. The Church of Scientology includes everyone. It doesn’t matter their faith or their background.”

The Scientology Information Center’s hours of operation are Sunday-Friday 10:30am-1pm and 2-7pm and Saturday 2-7pm.

The Scientology Information Center, located in the century-old Clearwater Building in downtown Clearwater, opened on July 11, 2015, and currently houses a gallery of audiovisual displays with some 400 videos. The Center is open to all and provides a self-guided tour showing basic Scientology beliefs, Churches around the world, ongoing social programs and the life of L. Ron Hubbard, Scientology’s founder. The Center offers tours to the broad public; holds concerts, theatrical performances and receptions for the community; and opens up the use of its conference room to social, civic and non-profit groups

Photo caption: On Friday, July 30th the Scientology Information Center hosted a replay of the Scientology TV Network program “Destination Scientology: Kaohsiung.” Featured in the episode is the 2013 grand opening of the Church, pictured above.