Virtual production enables filmmakers to interactively visualize and explore digital scenes such as realistic virtual characters, three-dimensional graphics, and a real-time virtual interactive background environment within the studio. Vast developments in the field of virtual production over the years have led to the introduction of solutions that allow filmmakers to transfer the motion-captured movement of an actor to virtual characters, which are then previewed in real-time, in combination with live-action footage and virtual set extension elements. Such solutions help filmmakers plan and communicate their creative ideas in new and more intuitive ways. The increasing demand for visual effects (VFX) in movie production studios worldwide and the rising application of virtual production in commercial ads are likely to boost the market growth over the forecast period. During the pandemic, in 2020, prominent Hollywood filmmakers, including NBC, MTV, and ABC, began adopting virtual production using cloudbusting, which involved using a robotic camera like the Solo Cinebot to shoot the actors remotely.

Gather more insights about the market drivers, restrains and growth of the Global Virtual Production Market

The increased adoption of the LED video wall technology is augmenting the implementation of virtual production across the media and entertainment sectors. LED video walls display computer-generated graphics in the background and enable filmmakers to capture visual effects in real-time. The LED video wall technology has substituted a green screen, making film production more accessible after the break of Covid-19. For instance, in April 2020, ABC’s show SkyLine filmed all their real-life scenes in a 360-degree camera and displayed them on the LED screen instead of the green screen. LED video wall screens create a realistic background visual that replaces an actual shoot location while saving the entire crew time and money. For instance, The Mandalorian TV series has extensively used semicircular LED video walls for the in-house shoot and the virtual production technology for overall production, eliminating the need for on-location shoots. Disney used LED walls of dimensions 20-feet high, 75-feet wide, and 270-degree, which made it possible to present the movement of the 3D image concerning the camera’s movement. 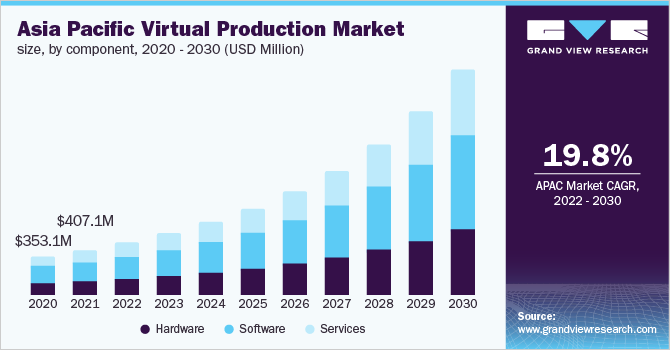 With the advent of advanced technologies in virtual production, filmmakers can create more advanced computer graphic characters using facial-capture training data to transform visuals into real-time characters. The most recent example of advanced visual effects is the transformation of actor Josh Brolin’s face into the lead villain Thanos in the latest Marvel Avengers Movies. Furthermore, artificial intelligence and machine learning features are expected to enhance the quality of visual effects further and simplify the design process of a three-dimensional model. Furthermore, the growing applications of artificial intelligence in content creation for action simulation, three-dimensional texturing, and post-process motion-capturing data are expected to lead to the development of advanced visual effect software functions in the near future.

Some prominent players in the global Virtual Production market include