Endocrine systems generally influences the way heart beats, and growth of bones & tissues. They play a fundamental role in the development of ailments such as diabetes, sexual dysfunction, growth disorders, and thyroid disease, along with a host of various hormone-related disorders. Organizations such as endocrine genomics virtual laboratory (endoVL) are helping researchers to work together on the development of effective treatment options for various rare endocrine disease manifestations.

Get Free Sample Copy of this Report@ https://www.persistencemarketresearch.com/samples/22579

The global rare endocrine disease treatment market will exhibit a moderate expansion in the period between 2017 and 2026, according to a new report of Persistence Market Research (PMR). Treatment of rare endocrine diseases across the globe are foreseen to close in on roughly US$ 12,000 Mn revenues by 2026-end. 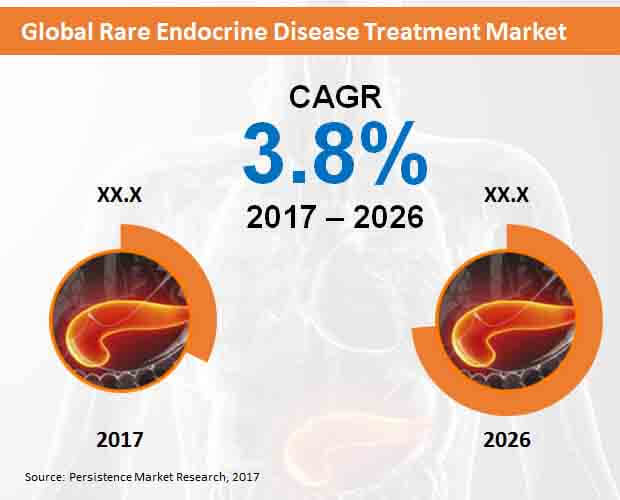 A number of rare endocrine conditions that include disorders of sex development and adrenal tumors have made life of patients affected with these diseases miserable, thereby gaining attraction of researchers for developing treatment options. However researchers face challenges regarding collection of efficient patient data, which offer clinical trials with a powerful statistical support.

endoVL, by utilizing world-class research infrastructure of Australia, offers researchers with a secure online access to analytical tools & extensive data sets, so as to enable them to work together for developing effective treatment measures for rare endocrine diseases. With over 25 remarkable clinical trials on rare endocrine disease treatment drugs that are currently being run in endoVL, several research groups from around the world are working in collaboration to realize treatment options for these diseases.

Prevalence of Beckwith-Wiedemann Syndrome (BWS) is as significant as 1/10,000 live births. Rare endocrine tumors, such as neoplasia, have been associated with adults suffering from. Occurrence of BWS in the adult population has gained a slight uptick in North America, according to the NIH. This has further triggered development and supply of treatment measures for this rare disease, underpinned by the region’s robust economic and resource vigour. PMR’s report estimates North America to remain the largest as well as the fastest-growing market for rare endocrine disease treatment.

Europe and Asia-Pacific excluding Japan (APEJ) are also expected to remain lucrative regions for growth of the rare endocrine disease treatment market. Revenues from the market in these two regions will register a moderate CAGR, and are collectively forecast to surpass those from North America by 2026-end.

Acromegaly to Remain Most Prevalent Indication among Rare Endocrine Diseases

Acromegaly will continue to be the most prevalent indication among rare endocrine diseases, with revenues from treatment of this indication estimated to account for bulk share of the market during the period of forecast. Despite high rarity of acromegaly, progression of the disease has been insidious. Researchers view earlier diagnosis and increased clinical vigilance to make real difference in lives of patients with acromegaly. Central diabetes insipidus will also prevail as a significant indication of rare endocrine disease, with revenues from treatment of this indication envisaged to surpass US$ 3,000 Mn by 2026-end.

Biologics will continue to be the preferred drug type for treatment of rare endocrine diseases. Although oral mode of administration of drugs related to rare endocrine diseases are witnessing a relatively faster penetration, revenues from their injectable counterparts are expected to remain larger throughout the forecast period. Based on distribution channel, hospital pharmacies will continue to lead the market, in terms of revenues.