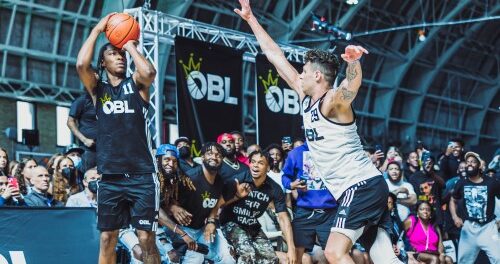 LAS VEGAS, NV, 2022-Jun-30 — /EPR Network/ — Ones Basketball League (OBL) — the first-ever elite competition that celebrates the most skilled one-on-one players on the planet and created by Basketball Hall of Famer Tracy McGrady — today announced that The Dollar Loan Center in Henderson, Nevada, will host the first-ever OBL Finals on Friday, July 15 and Saturday, July 16.

A limited number of tickets will be made available to the public for the event at https://bit.ly/OBL-LV. Friday’s event will start at 3 p.m. PDT, with the Championship Finals starting on Saturday at 8 p.m.

“Our proof-of-concept season for the OBL has played out better than we had planned, and The Dollar Loan Center is the perfect stage for us to crown our king,” said McGrady. “OBL talent is top notch, the competition is intense, and the atmosphere for our first-ever finals will be second to none with $250,000 cash on the OBL throne waiting for the winner.”
“Dreams are coming true inside the OBL and Tracy’s vision for change has been spot on,” said Jeffrey Pollack, OBL strategic advisor. “Over the last eight weeks we’ve started to demonstrate that our game has soul, our competition matters, and our events are electric. The gifted and gutsy athletes of the OBL deserve a world-class stage for our championship and that’s what we will create at The Dollar Loan Center.“

“There are few basketball legends and entrepreneurs more astute than Tracy McGrady, and we are proud to welcome his team to our new state-of-the-art arena in Henderson for the OBL’s inaugural championship,” said Kerry Bubolz, CEO of the Foley Entertainment Group, which operates The Dollar Loan Center. “In a city all about action, this promises to be the summer’s most intense event.”

The 22 qualifiers for the OBL Finals are coming to Las Vegas from Regional Championships in Houston, Atlanta, Chicago, New York, the DMV, and Los Angeles. The field was culled from over 200 entrants, including many of the best one-on-one athletes in the world with decades of professional and elite college experience. The winner of each OBL Regional took home a $10,000 cash prize, joining the second and third place finishers plus four “wild cards” with invitations to the OBL Finals. In addition to the $250,000 cash prize, the winner in the head-to-head single elimination OBL Finals will be crowned “Ruler of the Court.”