The global drug of abuse testing services market size is expected to reach USD 3.8 billion by 2028, according to a new report by Grand View Research, Inc. It is expected to expand at a CAGR of 5.2% from 2021 to 2028. The imposition of stringent laws mandating alcohol and illicit substance abuse testing is anticipated to drive the market during the forecast period. However, the violation of privacy rights while drug testing is considered a challenge and impedes the adoption of such testing services. 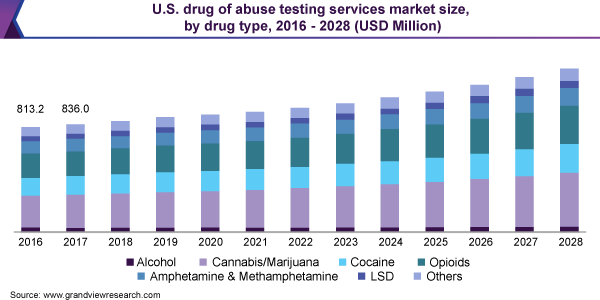 Workplace substance abuse is on the rise despite random tests being conducted by organizations. Commonly abused illicit drugs on the job are cannabis and cocaine. In the workplace, substance abuse might lead to significant loss of productivity, physical injuries, and even fatalities. On the basis of various drug abuse surveys, around 22.5% of people do not admit using alcohol or any illicit drugs during working hours. Around 1 in 10 respondents say that they come prepared to avoid the risk of random tests at the workplace. Therefore, there is a growing need for rapid and frequent drug of abuse testing at the workplace in order to minimize loss of productivity, absenteeism, and healthcare costs. However, with the COVID-19 crisis and subsequent lockdown scenarios throughout the world, people are staying at and working from home, which is expected to reduce the number of substance abuse cases at the workplace.

Grand View Research has segmented the global drug of abuse testing services market on the basis of drug type and region:

Based on the Drug Type Insights, the market is segmented into Alcohol, Cannabis/Marijuana, Cocaine, Opioids, Amphetamine & Methamphetamine, LSD, and Others

The key players adopt different growth strategies, such as new product development, product differentiation strategies, and expansion of geographical reach, to capture significant shares in the market. For instance, in September 2019, Psychemedics Corporation entered into a new distribution agreement with Toxicologia Pardini Ltda. and Sansão Holding S.A. in Brazil. As per the new contract, Toxicologia Pardini and Sansão were designated as a distributor of Psychemedics’ hair drug testing services in Brazil. With this, the company expanded its presence in the Brazilian market.

Some prominent players in the global Drug Of Abuse Testing Services market include: