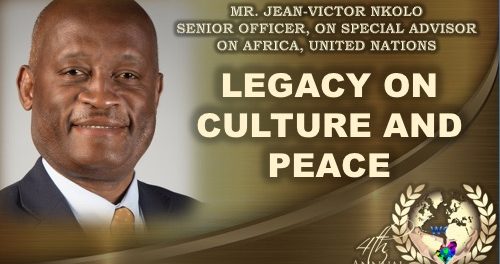 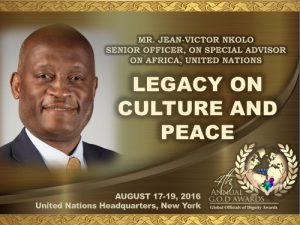 Jean-Victor Nkolo has worked at the United Nations for over 20 years. He held managerial positions in 10 United Nations peacekeeping missions. Moreover, he has previously served as Spokesperson for two Presidents of the United Nations General Assembly, namely during the 64th and 65th sessions. He has also served as Spokesperson for the Security Council during some of the Council’s missions outside New York. Before joining the UN, Mr. Nkolo worked for 13 years as an international broadcaster mainly covering conflicts for Radio Canada International, Radio Quebec Television in Montreal, the BBC World Service in London and Radio Netherlands International in Hilversum. A music and film critic, Mr. Nkolo is a member of several cultural foundations and was appointed bySecretary-General Ban Ki-moon to serve as a Member of the Board of Trustees of the United Nations International School. In 2006 he received an International Peace Award for his contribution to peace, justice and development in the Democratic Republic of the Congo. Mr. Nkolo graduated in cinema and audio-visual studies in France, and studied communications sciences in Canada. He is a national of Cameroon.

“We are very honored that Mr. Jean-Victor Nkolo is joining the list of our eminent honorees and speakers for the 4th G.O.D. Awards. We, at the G.O.D. Awards and We Care for Humanity are committed to honor and recognize the best people around the world who are making great impact to humanity in order to promote universal humanitarianism. Mr. Nkolo is one of the best example of humanitarians who is dedicated to make a change and he continuos to serve even outside of his area of responsibility in the United Nations.” admiringly said by Princess Maria Amor, founder and president of We Care for Humanity and creator of the G.O.D. Awards.

Nkolo will be honored at the 4th Global Officials of Dignity Awards(G.O.D. Awards) and scheduled to speak at the 3rd WCH Humanitarian Summit on August 17-19, 2016 at the United Nations Headquarters, New York. Both flagship events are organized by We Care for Humanity and its philanthropic partners: SREI Foundation, J & B Medical Company, HWPL and China-US Business Association.