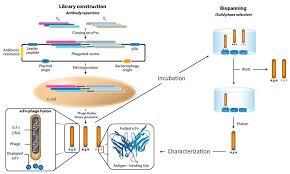 Health care stakeholders need to invest in value-based care, innovative care delivery models, advanced digital technologies. XploreMR will help you to know declarative, procedural, contextual, and somatic information about the “Antibody Library Technologies Market”. It also provides a critical assessment of the performance of emerging and mature markets in a new publication titled “Global Market Study on Antibody Library Technologies: Phage Display Segment by Technology to Register a CAGR of 5.0% During 2016–2024”.

Collaborations and cross-licensing are the key strategies adopted by a majority of players in the global antibody library technologies market. In a new publication titled “Antibody Library Technologies Market: Global Industry Analysis and Forecast, 2016–2024,” the analysts at XploreMR have observed that antibodies being a most successful biotechnology drug class, pharmaceutical companies are striving to add antibodies to their pipeline in order to alleviate patent cliff. While studying the various market segments the expert team of analysts have noted that North America represents the most lucrative regional market, followed by Europe and APAC.

Click HERE To get SAMPLE PDF (Including Full TOC, Table & Figures) and many more Information: https://www.xploremr.com/connectus/sample/4962

Another key observation is that despite phage display being the fastest growing technology, yeast display system is becoming a choice of technology due to the improved quality of MAB obtained through it. This report provides useful information regarding transitions in the business value proposition of key players. For instance, MorphoSys AG has set a goal to build the most valuable biopharmaceutical pipeline in the biotech industry and in line with this, the company is shifting its focus from technology licensing to drug development.

Why are Antibody Libraries not widely perceived as research reagents?

Although the antibodies selected by in vitro method are very powerful, the technology is not widely perceived as a valuable research reagent. The primary reason is a patent situation, which limits the use of this technology to high margin therapeutic markets. In contrast, classical hybridoma technology was never patented and thus achieved widespread acceptance in academics as well as for commercial purposes within a short period of time. However, some of the phage display patents are about to expire in the next few years while some have already expired, which may result in wide acceptance of the new technology. This technology is largely unnoticed by the research community due to the dominance of traditional hybridoma technology in most of the markets. For instance, some of the commercially available monoclonal antibodies are actually obtained by phage display screening but are reformatted to resemble murine antibodies.