Meghalaya, India, 2021-Sep-14 — /EPR Network/ — One of the most beautiful places in the world, Meghalaya is a north-eastern Indian state. Known as the abode of the clouds it is bordered by Bangladesh on the South and by Assam on the North. The people of Meghalaya are deeply religious and believe in tribal culture and folklore. As the state has been bestowed generously by nature, people from all around the world come to visit this land for its beauty and tranquillity. Meghalaya tourist places are plenty in number and each one offers something new and striking to see. 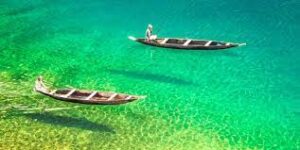 Before you visit Meghalaya tourism place let’s take a look at some of its most interesting facts.

Most of the tribal groups situated in Meghalaya follow a matrilineal system. It means that instead of the oldest son, the youngest daughter of the family inherits everything and she is the caretaker of her old parents and any unmarried siblings. If a family has no daughters, they adopt a girl from another family by performing religious ceremonies in front of the community. This custom is known as ia rap iing. They can also select a daughter-in-law as the head of the house instead. Meghalaya has one of the largest surviving matrilineal cultures in the world.

Meghalaya is very famous for its Living Root Bridges. They are a kind of simple suspension bridge made of living root plants. These bridges are made through the process of tree shaping which involves training the roots of the Ficus Elastica tree to grow a certain way. It can take up to 15 years for the roots to become strong enough to hold the weight of human beings and the longer these roots survive the stronger they become. Meghalaya has living root bridges as old as 500 years. Its most famous root bridge is the Double Decker Root Bridge that has a root bridge stacked on top of the other.

Meghalaya is known as the wettest place on Earth. It has received the heaviest rainfall in the world. It is rarely the case that it is not raining in this beautiful state and it is known for receiving an average of 1,150 cm rainfall every year. Cherrapunji in Sohra has received the most rain in a month while the village of Mawsynram has the record for receiving most rain in a year. Due to a massive deforestation in the recent years, flash floods have become a norm in this place. Due to a heavy rainfall, Meghalaya offers a huge variety of flora and fauna for you to fawn over. Pun intended!

Being only one of three Indian states to have so, Meghalaya has a Christian majority with 75% of its population following the religion. Since the Garo and Khasi tribes make for a majority of the population their religion is the most prominent in the state with the rest of the tribes being majorly Hindu. Hindus make up for the largest minority in this state with an 11. 52% while Muslims are a mere 4. 39%. The reason for this majority is colonization. British India started converting indigenous tribes into Christians in the 19th century. Presbyterians and Catholics are the most common denominations present in Meghalaya today.

Did you know that Hindi is taught as an option subject in Meghalaya? You heard it right! Schools in Meghalaya; private, government or religious institutions only teach the students in English language. All the other languages of India like Hindi, Assamese, Bengali, Garo, Khasi, Mizo, Nepali, and Urdu are taught as optional subjects. To regulate the matters of education in the state, the Meghalaya Board of School Education was setup in 1973. This board is majorly responsible for conducting the Secondary School Leaving Certificate (SSLC) and the Higher Secondary School Leaving Certificate (HSSLC) Exams.

Meghalaya is an agrarian economy which means the economy of Meghalaya is based upon growing crops and maintaining farmland. Almost 10% of the land in this state is under cultivation on which the 80% of their population survives. One would think that the people of this state would be experts in the subject of Agriculture. But that is not the case! People here make a limited use of modern techniques and therefore yield poor results and low productivity. Due to this a total of 12% of the state population is below poverty line and the state still imports food from other Indian states.

In 2018 it was discovered that Meghalaya has the largest sandstone in the world. A 25-day expedition later, scientists found a 24,583-meter-long canal in a cave. It is home to dinosaur fossils as old as 70 million years and you have to crawl through the cave to explore it. This sandstone is situated in the village of Laitsohum in the Mawsynram. Earlier this title belonged to Cueva El Samán in Venezuela but the Meghalaya cave is 6,000 meters longer than this. Meghalaya has 1,650 caves in total out of which only 1,000 have been explored so far.

Jhum farming has been an age-old tradition in the Northeastern India including Meghalaya. It involves the process of slashing or burning a patch of forest land destroying dried trees, shrubs and bushes. It is done under the belief that this improves soil quality. Although, in recent times this practice has become a threat to the natural biodiversity of the state as many dense patches of land have been lost because of it. It has become a significant problem in Meghalaya especially as most people depend on agriculture for their livelihood.

Meghalaya has one of the largest eco-tourism circuits in India and therefore, benefits a lot from it. A large part of the state’s economy thrives on Meghalaya tourism. Due to the many adventure sports like mountaineering, rock climbing, trekking, and hiking, spelunking and water sports this state has to offer; it is a hit amongst Meghalaya tourist. Meghalaya tour places include Umiam Lake, Cherrapunji, Elephant falls, Dawki, Mawlynnong village, Living Root Bridges, etc. Due to covid, a valid e-invite is necessary to travel to this Indian state.