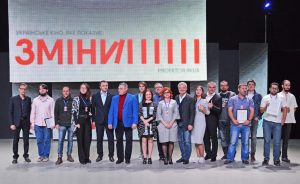 KYIV – MYKOLAIV, Ukraine, 2016-Oct-07 — /EPR Network/ —  The awarding ceremony of the short film festival “Civic Projector”, the third one in a row, has been conducted on the last days of September. The theme of this year’s contest has been clear and simple: “Changes”, to bring into the light the complicated process of changing our country and our citizenship. Traditionally, the festival has been supported by Igor Iankovskyi National Charity Foundation “Initiative for the Future”.

With the help of the short meter movies, the producers aimed to create a platform along with directors and viewers to induce a constructive dialogue on how the life around is being changing in Ukraine, how those changes perturbate people, cities and the whole country. And furthermore – how those changes are being Ukrainians go through them.

“We are supporting the “Civic Projector” for the third year in a row and truly rejoicing that the festival grows both quantitative and qualitative. Due to the changes that are happening in our country, the new law on cinema, due to the appearance of new festivals, a lot of people among the contestants will find partners and investments for their projects. I believe that those changes will bring the wave of success for our country as well. Ukraine will be recognized in the world by its creativity and arts. That is what makes me happy, that’s why we will continue our support of this festival in the future”, – said the philanthropist Igor Iankovskyi.

It is important to note, that in 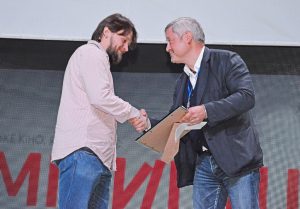 three years the festival in Mykolaiv has grew into the national event. If the last year there were 40 movies in the contest, this year the quantity grew up to 80. Among this enormous quantity of movies, the jury had to those the best 25, which were projected on the big screen of the Mykolaiv’s concert-hall “Yunist”. The concert-hall was full of spectators so the organizing committee ran out of 500 copies of enquiries to distribute among them.

“We contacted the West of Ukraine and received movies from Lviv, contacted the East – received the movies from Kharkiv. Traditionally the contest is frequented by the contestants from Odessa, Mykolaiv and Kherson. This year we note the increase of works from Kyiv. We also received movies from Kryvyi Rih and Dnipro. What is very pleasant is the increase of the part of young directors from such little cities as Pivdenne in Odessa region. We received works even from villages like Rozsoshentsi village of Poltava region. We are rejoicing that socially-sensitive cinema is introduced to the regions”, – noted the activist Andriy Lokhmatov.

Due to the rapid geographical extension of the festival, under the initiative of ex-governor Vadym Merikov (2014-2016) has been introduced a new nomination: “Cinema of the regions”. This year his own award to the best director was given by Mykolaiv’s mayor Oleksandr Senkevych, who gave the “loose-tie” attitude to the whole ceremony. Thanks to him, this year’s ceremony has been accompanied by fun, applause and laughter from spectators.

The festival’s jury, that this year was honorably headed by the Head of the State Film Agency of Ukraine, Pylyp Illienko, has been traditionally choosing three winners in two nominations: “Story film” and “Documentary”. The winner of the “Viewer’s choice” nomination was decided by voting by the spectators themselves.

“This year’s theme is very appealing because of those important changes that Ukrainian cinema industry is going through. Notably, there has been an important shift in the State’s perception of cinema, and the industry and cinema-makers felt this immediately. The adoption of the law on the State support of the cinema is without exaggeration the most revolutionary reformatory act in our cinema from the Independence, and this is a step towards Europe, this is a farewell to the rudimentary leftovers of the Soviet Union. 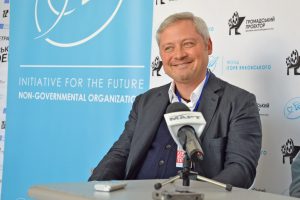 Furthermore, this is an enormous motivation towards the integration of our cinema into the world processes”, – noted the Head of the State Film Agency of Ukraine, Pylyp Illienko.

So, the awards in the “Documentary” nomination went to:

3rd place – “One day in Niko” by Ievgen Umanov, Mykolaiv.

The awards in the “Story film” nomination have divided as follows:

The “Viewer’s choice” nomination was given to the “One day in Niko” by Yevgen Umanov from Mykolaiv.

All the winners have also received monetary prizes, which should contribute to their creative and professional growth.

To recall, the collection of works for the third short-films festival “Civic Projector” had been opened from the 15th of June to the 15th of September. The cinema-makers have been shooting documentaries and story films on acute social matters that reflect the changes in the society. For the finals the jury has selected 25 short films worth a special attention from the viewers.

Igor Iankovskyi National Charity Foundation “Initiative for the Future” supports this film festival in Mykolaiv for the third year in a row. Along with the festival’s organizing committee, it aims at supporting the talented youth from the regions and helps it in the creative and professional growth. The civic and social specialization of the festival helps to develop the national dialogue and the civil society in Ukraine.