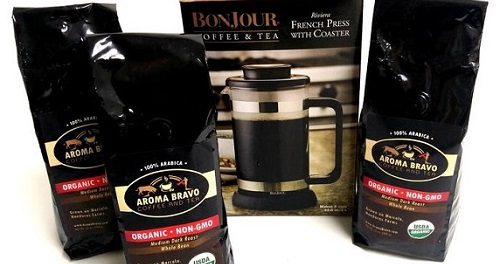 CARSON CITY, NV, U.S.A., 2017-May-27 — /EPR Network/ — The coffee giveaway sponsored by Aroma Bravo Coffee and Tea and DIY Idea Center have been gaining more and more entries lately. This is because coffee lovers from the U.S. and Canada have been scrambling to join the coffee giveaway before the contest ends this Sunday.

With a free Bonjour French Press and 3 packs of Aroma Bravo gourmet coffee beans at stake, it comes as no surprise that people are eager to submit their entries. Most of the participants even send 5 entries every single day (the maximum daily limit) to give them a higher chance of winning.

Those who have just heard about the giveaway contest have also been very diligent about joining. To make up for lost time, many of them put the daily limit to their advantage and simply hope for the best.

“It’s a shame that I only found out about the contest the other day,” says one participant from Canada. “I would have submitted lots of entries had I known earlier. Nevertheless, I’ve been sending 5 entries every day since I joined. I plan to do this until the end of the contest. I may not have a lot of entries yet but it’s still something. It’s a random draw anyway, so there’s still a chance that I would be the winner,” the Canadian coffee lover said.

Upon hearing about the high turnout of participants, the Aroma Bravo Coffee and Tea staff members could not hide their excitement.

“It’s such great news to know that many North American coffee lovers are interested in our little giveaway contest. This event was created so we can share our love for gourmet coffee with our fellow enthusiasts, and all this positive response we’re getting is more than we can ask for. We can’t wait for the contest to end so we can finally award the free Bonjour French Press and 3 packs of our own Aroma Bravo gourmet coffee beans to the lucky winner!” A representative from Aroma Bravo said.

The coffee set giveaway will officially conclude at 11:59:59 PM Eastern Time on the 28th of May. Interested parties can still enter the contest by visiting DIYIdeaCenter.com.