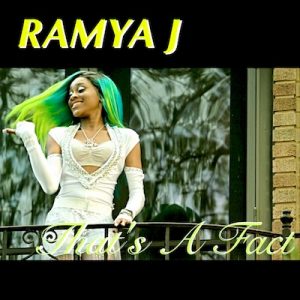 Thirteen year-old Ramya J has announced the release of the first single titled “That’s A Fact” from her upcoming EP titled “Imagine That”. It”s a fun filled hip-hop track about a girl who has her boy”s back and knows the genuine importance of being the Bonnie to his Clyde in the crazy little game of love and will drop the week of July 17th, 2017. This young and talent little singing princess from Flint, Michigan, is also a motivated entrepreneur who, along with family members, has even launched her own eponymous label called RamyaJMusic.

Since the second grade Ramya J has been performing not only locally but across the nation and has even appeared on the famed stage of New York City”s Apollo Theater. This has helped the young ingénue hone her craft and build her fan base around the world. It has also earned support from media megastars such as recording artist, producer and songwriter Jermaine Dupri (Jay-Z, Alicia Keyes, Nelly, Janet Jackson…), RCA Records singer/songwriter Jazmine Sullivan, and actor and singer Jussie Smollett (Twentieth Century Fox Television star on the hit series “Empire”).

A North American radio and press campaign has been launched to promote “That’s A Fact”. This latest offering from Ramya J is anticipated to not only hit regional radio charts throughout the USA and Canada but to also appear as well on national radio airplay R&B/Hip-Hop charts as it steadily climbs to the top of broadcaster”s play lists. The single officially begins to impact mainstream radio rotation play lists the week of July 31st. Also in the works is a music video for “That’s A Fact” featuring fellow child star Tootie Raww.

Ramya J is currently available for interviews and/or appearances. Her press kit will be provided upon request to all members of the media. News, updates and additional information may also be found at: www.facebook.com/ramyajofficial. The immediate future looks very promising and bright for this young artist, and from her perspective, that”s an undeniable fact!