San Diego California, 2018-May-22 — /EPR Network/ — Health and hygiene play a vital role in our daily lives, and it deserves more attention and consideration. We often take sanitation and cleaning for granted and frequently forget the standard of living we can afford is mainly due to these two factors. This is precisely where the role of plumbing comes into play. Let us now shed light on the most professional and Premium Company present in the San Diego Plumbing industry today, namely the American Plumbing Co. 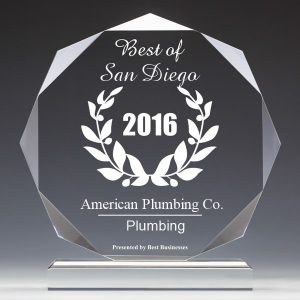 Existing in the plumbing industry for more than 35 years, American Plumbing Co has emulsified into a firm which is known for its quality of service. Catering to thousands of clients throughout the years, the organization now looks to take its operations to an all new level. The firm now seeks to change the entire landscape of Plumbing in San Diego as its services now also extend to the weekends. The company now looks to provide service even during the weekend as it seems to operate from 9 am to 4 pm on Saturdays, and 10 am to 3 pm on Sundays. Such is the commitment of American Plumbing Co and the experts working under its umbrella.

“Our clients deserve the Best Plumber in San Diego, every day, every time.” said Charlie Gonzales from American Plumbing. Due to its sheer professionalism, the group has also received the award for being the best plumbers in San Diego in 2016. The organization also holds valuable credentials on various online platforms as it has received 5-star ratings on Google by more than 150 happy customers and also reflects 5-star rating on Yelp.

For more detail at http://www.sandiegoplumberonline.com/