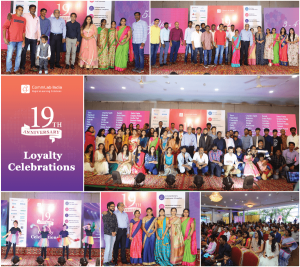 On September 01, 2000, CommLab India was started by Dr. Ayesha Habeeb Omer, and RK Prasad to take training outside the confines of the brick and mortar classroom and make it available online, anytime, anywhere. The journey progressed from three employees to 130, and along the way, CommLab India constantly foresaw changes in the business domain and reinvented itself to stay relevant and competitive. For instance, CommLab India was one of the first companies to identify the time-consuming, cumbersome processes associated with Flash and promoted the use of rapid authoring tools.

CommLab India’s Loyalty Day celebrations on the occasion of its 19th anniversary saw employees and their families enjoying well-choreographed dance sequences, mini-games, and themed photo booths. The kids’ play arena took the excitement factor several notches higher as there was something for all to enjoy and create beautiful memories. It was then time for the employees – amidst the glitz, glamor, and families, they were recognized and rewarded for their valuable contribution toward CommLab India over the years. From 10 to 15 years, 5 to 10, 3 to 5, as well as those who joined recently – everyone was thanked for their loyalty to the company. This also helped friends working across departments meet and exchange notes on their journey, in a genial atmosphere, rekindling their camaraderie.

It was a great opportunity for new employees to get to know the veterans who’ve spent several years with CommLab India. A sumptuous feast with yummy Hyderabadi dishes including the favorite Biryani concluded the day on a royal note.

“Loyalty is our most important value and this day is entirely dedicated to it. A person who spends even a single day with us has demonstrated loyalty, and what better occasion to express our gratitude to our employees who have been with us and made CommLab India a success these 19 years in the eLearning Industry” signed off Mr. RK Prasad, CEO & Co-Founder CommLab India, capturing the essence of the event.