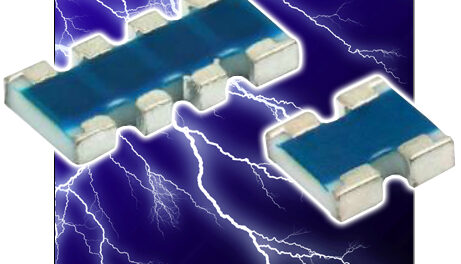 It delivers a five-fold amplification factor increase as compared to previous-generation devices. Offering two and four integrated resistors on one substrate respectively, the ACAS 0606 AT and ACAS 0612 AT is less costly than using multiple high-precision discrete resistors, while at the same time their stable divider ratio improves application stability.

The ACAS 0606 AT and ACAS 0612 AT precision automotive grade thin film chip resistor arrays with convex terminations combine the proven reliability of discrete chip resistors with the advantages of chip resistor arrays. Defined relative tolerance (matching) and relative TCR (tracking) make this product perfectly suited for applications with outstanding requirements towards stable fixed resistor ratios. The ACAS AT is available with equal or different resistor values.

The series has been designed for increased accuracy. Examples of this include its absolute tolerance of ±0.1% and relative tolerance of ±0.05%, its absolute TCR down to ±10 ppm/K and Relative TCR down to ± 5 ppm/K. With its sperior moisture resistivity of l∆R/Rl < 0.5 % at +85 °C and 85 % relative humidity for 1000 hours, its extremely robust against harsh environmental conditions. It is used for precision analog circuits, voltage dividers, signal conditioning, operational amplifier (opamp), and feedback circuit applications for automotive electronics, such as engine control units, gear box controls, safety, power supply electronics, body electronics, braking systems, climate control, steering technology and lighting. It’s also used in industrial electronics, including battery measurement systems, sensors, scales and precision amplifiers and audio equipment and instrumentation.

New Yorker Electronics is a franchise distributor for Vishay Beyschlag and carries its complete line of SMD Resistors, Leaded Resistors and Power Resistors and resistor networks and arrays.

About New Yorker Electronics
New Yorker Electronics is a certified franchised distributor of electronic components, well known for its full product lines, large inventories and competitive pricing since 1948. It is an AS9120B and ISO 9001:2015 certified source of passive components, discrete semiconductors, electromechanical devices, Flash & DRAM modules, embedded board solutions, power supplies and connectors, and operates exclusively at heightened military and aerospace performance levels. New Yorker Electronics operates in strict accordance with AS5553 and AS6496 standards in its everyday procedures to thwart the proliferation of counterfeit parts. It is a member of ECIA (Electronics Component Industry Association) and of ERAI (Electronic Resellers Association International).