The report “Seaweed Cultivation Market by Type (Red, Brown, Green), Method of Harvesting (Aquaculture, Wild Harvesting), Form (Liquid, Powder, Flakes, Sheets), Application (Food, Feed, Agriculture, Pharmaceuticals), and Region – Global Forecast to 2025″, The market size is estimated to be valued at USD 16.7 billion in 2020 and is projected to reach USD 30.2 billion by 2025, recording a CAGR of 12.6% during the forecast period, in terms of value.

Seaweeds are plant-like organisms that are also known as marine microalgae; they are generally attached to a rock or other hard substratum in coastal areas. The classification of seaweeds is based on various properties, such as pigmentation, the organization of photosynthetic membranes, the chemical nature of the photosynthetic storage product, and other morphological features. The application of seaweeds dates back to the fourth and sixth centuries in Japan and China, respectively. Since then, increasing investment and focus on R&D activities pertaining to seaweed were undertaken globally, which encouraged the cultivation of seaweeds. Currently, seaweeds account for more than 90% of the global market’s demand. 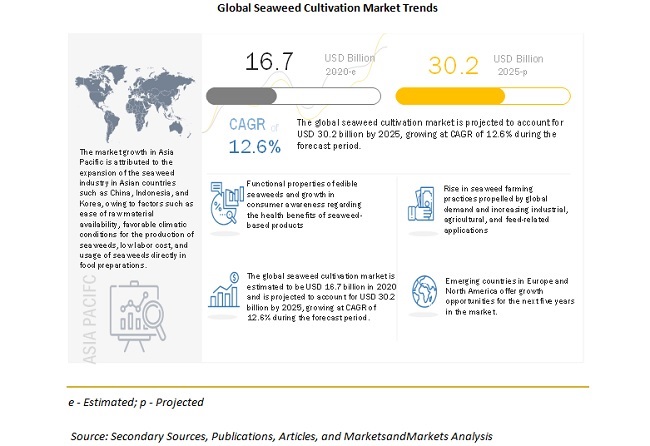 The green seaweeds segment is projected to be the fastest growing, in terms of value, during the forecast period.

The emerging use of green seaweeds in other application areas such as biofuel production and wastewater treatment is expected to drive the market growth further. Initiatives by the UK Department of Transport to double the use of biofuel in 2020 are expected to have a positive impact on the demand for green seaweeds. Green seaweeds such as Ulva and Enteromorpha are used for the removal of toxins from industrial wastewater. It is also used as a bioremediation tool.

Seaweed is used as an ingredient in food products and is consumed directly in countries such as Japan, Korea, and China since ancient times. As it is rich in nutrients such as high iodine, calcium, magnesium, iron, vitamin, antioxidant, and fiber, seaweed, is widely considered a healthy food. Moreover, seaweeds have various applications as a thickening and gelling agent in processed food products such as sausages, bread, creams, cheese, dairy drinks, and candies. In addition, the use of seaweeds for the manufacturing of low-calorie ice creams and cakes is further projected to fuel the market growth.

Due to the increasing presence of tropical rainforests in the Asia Pacific, various species of seaweeds are found in this region. With a wide variety of seaweed species in this region and increasing production of the seaweed-based products, Asia Pacific remains the largest supplier of seaweeds to both domestic and export markets. In addition, the bulk of seaweeds in this region is obtained from culturing (harvested through aquaculture). The key seaweed types that are in demand in this region include nori, kombu, and wakame. They are increasingly used in food preparations in the Chinese and Japanese diets. As seaweeds are nutrition-dense and are increasingly used as an ingredient in processed food, consumers prefer spending on processed food for healthy diets. The demand for clean labels and organic products is on the rise, which is also leading to the increasing use of seaweeds as organic fertilizers in the agriculture industry. The other industrial applications of seaweeds in the region include pharmaceuticals, agriculture, cosmetics, biofuel, and feed additives. These factors are projected to fuel the growth of the seaweed cultivation market in the Asia Pacific. Of the various countries in the Asia Pacific, China and Indonesia are projected to account for a major share of the market.