CRISPR-U™ (based on CRISPR/Cas9 technology), developed by Ubigene, is more efficient than general CRISPR/Cas9 in double-strand breaking, and CRISPR-U™ can greatly improve the efficiency of homologous recombination, easily achieve knockout (KO), point mutation (PM) and knockin (KI) in vitro and in vivo. With CRISPR-U, Ubigene has successfully edit genes on more than 100 cell lines.

CRISPR/Cas9 recognizes the target sequence with gRNA, and guide Cas9 endonuclease to cut the upstream of PAM, resulting in the double-strand break (DSB) of the target site DNA. To repair the DSB, the cell uses its own DNA repair mechanism to add or delete or replace pieces of DNA sequences via Homology Directed Repair (HDR) or Non-Homologous End Joining (NHEJ).

gRNA and Cas9 would be transferred into cells by virus transduction, liposome transfection or nucleofection. After drug screening, single clones would be generated. Positive clones would be validated by sequencing.
Classification of gene knockout cell line

Short fragment removalGuide RNAs target introns at both sides of exon 2 and the number of bases in exon 2 is not a multiple of 3, which can cause frame-shift mutation.

Chinese hamster ovary (CHO) cells have been used as host cells in the production of a range of recombinant therapeutic proteins, including monoclonal antibodies and Fc-fusion proteins. Host cell proteins (HCP) represent impurities that must be removed from therapeutic formulations because of their potential risks for immunogenicity. While the majority of HCP impurities are effectively removed in typical downstream purification processes, clearance of a small population of HCP remains challenging. Using the CRISPR/Cas9 system, Anxa2-, and Ctsd-knockout CHO cell lines were successfully established, and this study confirmed the complete elimination of the corresponding HCP in cell lysates. Importantly, all knockout cell lines showed similar growth and viability to those of the wild-type control during 8 days of cultivation. Thus, knockout of unrequired genes can reduce contamination with HCP in the production of recombinant therapeutic proteins. 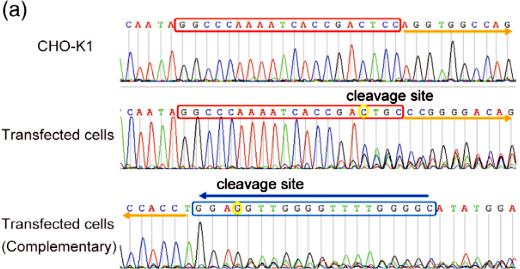 （a）The constructed sgRNA targeted a unique sequence in exon 4 of the Anxa2 gene. The amplicon sequence was analyzed in both directions. 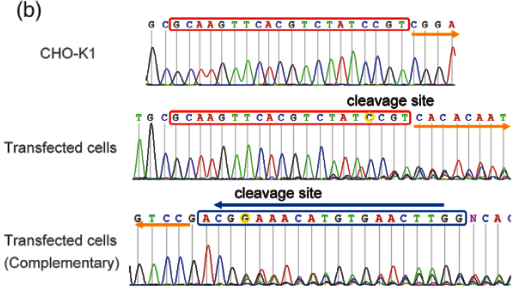 （b）The constructed sgRNA targeted the unique sequence in exon 2 of the Ctsd gene.The amplicon sequence was analyzed in both directions.

Characterization of protein expression from CHO knockout cell lines by SDS-PAGE and western blotting analysis.
(a) Anxa2-knockout cell lines.
(b) Ctsd-knockout cell lines. Cell culture supernatants and cell lysates were subjected to SDS-PAGE. Total proteins were detected by CBB staining. Western blotting analysis of each protein was performed using respective capture and detection antibodies.
The asterisk indicates the nonspecific band. The double asterisk indicates what is likely a fragment of cathepsin D.
Annexin A2 and cathepsin D were not detected in the cell culture supernatants or lysates of the corresponding knockout cell lines, suggesting successful exclusion of these impurities from host cells for therapeutic protein production. In addition, no truncated HCP was observed in the protein expression analysis of the Anxa2 and Ctsd knockout cell lines.
Reference：
Fukuda, N., Senga, Y., & Honda, S. (2019). Anxa2‐and Ctsd‐knockout CHO cell lines to diminish the risk of contamination with host cell proteins. Biotechnology progress, e2820.