Milan, Italy, 2016-Sep-05 — /EPR Network/ — Edo is thrilled to announce the launch of Kickstarter campaign for their innovative, eco­friendly, extra­large cardboard blocks. The blocks can be used by kids to bring ideas to life.

Whether kids want to build a fort or a car, Edo blocks make it easy for them to build life­sized creations.

The oversize cardboard blocks will be available in two sizes to accommodate various construction concepts. Kids can put together two or more blocks to create longer bricks pieces. The blocks are also art­ready, allowing kids to further their imaginations by coloring or painting on each block.

Edo blocks are durable and can support weight up to 100 pounds. The blocks are made of recycled material and are 100% recyclable. Their colors are non­toxic, offering a safe, eco­conscious way for kids to play. Edo blocks offer fun play for kids ages 2 and up.

In addition, Edo blocks can even be used as functional building materials. The blocks can be used to build a table, nightstand, bookshelf, and more.

The team at Edo  is launching their innovative play blocks on Kickstarter, and the company hopes to raise funds for manufacturing and shipping while increasing awareness for their products.

The Edo Kickstarter campaign is live now and early birds deals start at $28 for a collection of 25 blocks.

Edo was created in Italy by Simon Marussi, inspired by his son Edoardo. Together they were looking for a toy or game that allowed them to build and create new things. Traditional Legos were too small and blocks available on the market were poorly

constructed. Simon was inspired to create a quality block that would stimulate play, creativity and reusability, and Edo was born. 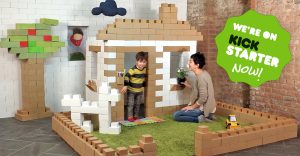