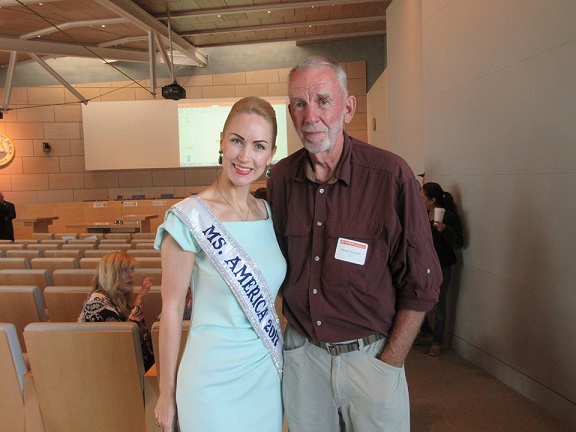 “This was a long-awaited event for all Newport Beach residents”, Vovk said shortly after the opening ceremony took place in the Community Room and City Hall open session chambers, where everyone in attendance had a chance to learn more about the amazing new art coming to the Civic Park. “Mayor Muldoon is doing such a great job in bringing arts to the City and meeting the artists in person during and after the ceremony was just very special. Nine new sculptures will decorate the Civic Park and give our City a great makeover”.

Vovk won Ms. America 2017 title with her two-fold platform to fight autism and promote organic living. She is determined to make a difference during her year as Ms. America 2017 by positively influencing her community and getting more women involved in community service and helping others.

Ms. America Pageant is open to women 26 years of age and up, single, divorced, widowed or married, with or without children. For more information about the Ms. America® Pageant please visit Pageant’s official website at: www.MsAmericaPageant.com. The Ms. America ® Pageant is a registered federal trademark with the USPTO in Washington DC since February 2000 and ranks as one of the top pageant trademarks in the United States.

“My new favorite sculpture was made by California artist Steven Reiman and is called “Flight”, Vovk continued. “I arrived at the ceremony early and had a chance to walk around the park and look at each sculpture up close, and “Flight” just took my breath away. Such a powerful statement embodied in this piece of art made of stainless steel and bronze. According to Mr. Reiman, the symbolic bird soaring through a ring of the sun represents a future of wonder with the random letters that cover its form questioning the human experience and how we impact our future. I met with Mr. Reiman and his lovely wife Ruth right after the ceremony and I was truly touched by his kindness and great passion with which he spoke about his creation. I Love Arts and now I have a new favorite sculpture in my city created by an amazing artist”, Vovk said.