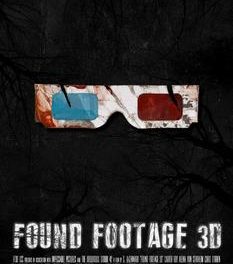 FF3D tells the story of a group of filmmakers who travel to a remote cabin in the woods to shoot “the first 3D found-footage horror film,” but find themselves *in* a found-footage horror film when the evil entity from their movie escapes into their behind-the-scenes footage.The Hollywood News describes the film as “Scream meets The Blair Witch Project.”

“We are proud to bring Found Footage 3D back to our home town for its Texas Premiere at a renowned festival like AFF,” says Writer/Director Steven DeGennaro. Executive Producer Joe Woskow adds, “Austin is well-known for its influential role in the film industry. It’s exciting to share Found Footage 3D with Austin audiences in all its gory 3D glory.”

Found Footage 3D recently had its World Premiere in Chicago at Bruce Campbell’s Horror Film Festival, where it received overwhelmingly positive reviews from a packed theater and was honored with the festival’s inaugural Jury Award, presented to DeGennaro by Bruce Campbell himself. “I set out to make a smart, scary feature film, and the reviews we’ve received thus far have been phenomenal,” DeGennaro says.

The Texas Premiere of Found Footage 3D will be screened in 3D at the Alamo Drafthouse Village on Saturday, Oct. 15, with  a second 3D screening at the Galaxy Highland Theater on Tuesday, Oct. 18.

Horror film fans will have a chance to win tickets to the Texas Premiere by signing up for the film’s email list at foundfootage3d.com. Along with the official trailer, the website features immersive 3D and VR behind-the-scenes videos.

When he’s hired to document the behind-the-scenes action of the ultra low-budget horror movie “Spectre of Death” (“the first 3D found-footage horror film”), an aspiring filmmaker packs up his camera and travels with the film’s crew to a creepy cabin in the woods. But when the fictional evil presence from their film begins appearing in his behind-the-scenes footage, he has to figure out how to stop it, or it just may find its way into the real world. In the same way “Scream” deconstructed the slasher sub-genre in the 1990s, “FF3D” takes a found-footage horror movie and populates it with people who are aware of all of the rules, tricks, and clichés of the genre. They know how to make a found footage movie. But do they know how to survive one?

Austin Film Festival is the premier film festival recognizing writers’ and filmmakers’ contributions to film, television, and new media. Austin Film Festival furthers the art and craft of filmmaking by inspiring and championing the work of screenwriters, filmmakers, and all artists who use the language of film and television to tell a story. For more information, schedule, and film passes, visit austinfilmfestival.com.