New York City, USA, 2018-Nov-20 — /EPR Network/ — “Pan-Indigeneity itself isn’t the problem. The problem is not knowing where you come from, who you are, and who or what Nation you may be taking an identity from by commodifying that Nation’s designs,” says Sheldon Raymore, CEO and owner of Heyoka brand clothing (www.heyokanyc.com). 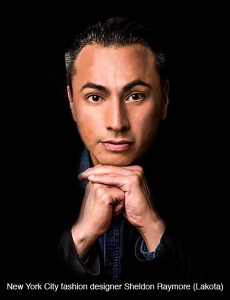 A Cheyenne River Sioux Nation tribal member, Raymore has been a fashion designer in the New York City fashion industry for over 10 years, and is no stranger to the cultural highjacking that is the casual nature of the fashion industry. Raymore has worked for such designers as Angelo Galasso, and Roberto Cavalli and has seen many incarnations of “Native American inspired” clothing and designs.

One of the best examples of this extraction and appropriation was the 2012 lawsuit brought against the popular clothing brand Urban Outfitters by the Navajo Nation for appropriation of the Nation’s name and tribal designs.
“Consumers that are outside of our culture don’t understand our culture,” says Iako:wihe`ne Oakes, CEO and owner of Mohawk Coterie (www.mohawkcoterie.com).
The NYC fashion designer and jewelry artisan was born and raised on an Iroquois reservation bordering Canada and the United States. Oaks is from the Mohawk Nation and of the Snipe-clan family. After earning numerous degrees in fashion and business, Oaks founded her own fashion company and has become one of the most prominent First Nations jewelry artisans on the east coast.
“A challenge we face is that we’re Pan-Indigenized.” 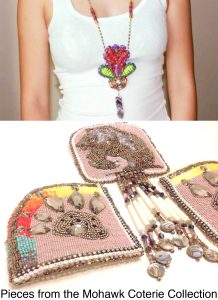 Oaks continued, “often times we’re finding that the non-native consumer has a commodified outlook on native culture and we’re having to educate them constantly.”
A sad commentary considering how many non-natives would rather buy “Native Inspired,” rather than “Native Made,” and with little – if any – concern for the tribal Nation being erased and minimized by big fashion. In short, a continuation of a systematic genocide over 550 years old. A devastating blow that Raymore and Oaks are not willing to bear the brunt of.
In an effort to hold an industry of cultural pirates accountable, both Raymore and Oaks have begun attaching Indian Arts and Crafts Act compliancy tags to their garments before they hit the sales floor. These tags inform their consumers that the merchandise meets the criteria and standards to be called “Native Made,” as the act prohibits any such misrepresentation that a product may be presented as “Indian Made” if not created by a member of a Federally or State recognized tribe.
In addition to exclusive Heyoka clothing brand and Mohawk Coterie merchandise having been made available to the public at an all day boutique this past Sunday, November 18th at the First United Lenape Nations Pow Wow – held in Manhattan at the Thompson Art Center at Park Avenue Armory – Raymore and Oaks were also key speakers on the “Native Appropriations Fashion, Art, and Breaking the Cycle” panel discussion at the prestigious event. The two corner stones of the NYC Native American Fashion community discussed solutions for cultural appropriation, as well as ethical fashion and cultural sustainability.
“Stop taking from us,” Oaks told a captive audience that included a wealth of non-native individuals. She explained how violating it is to have a piece of your identity mass-produced and commodified. To which many Natives in the room audibly empathized.
“People assume that we’re one monolithic culture and we’re not,” Raymore explained as he persevered in educating what at times presented as a very privileged audience.
Both Raymore and Oaks were present at their fashion boutiques to graciously answer questions from consumers and set a stand-up example of what it means to artistically push back against an all too often complacent industry in one of the fashion capitals of the world. 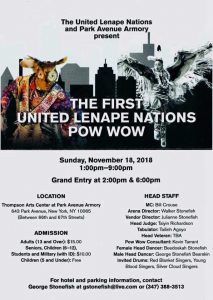 In an age of socio-political turmoil, the onus is on us as a people to go forward in a solution oriented way, where those living lives of privilege walk in awareness and with a sense of moral and social responsibility. “Ethnic Fatigue” is a real challenge due to minorities having to constantly educate the majority, and self education is paramount for the said majority. However, it is powerful to see how positive change can happen when warriors come together as did Raymore, Oaks, and several other Native fashion designers and artists for the Sunday evenings fashion panel.
There is strength in numbers, and as Oaks put it, “You can’t break a leader of the movement, if the movement is executed as a group.”
“The right people with the same issues that face the same challenges.”
“Our collective work is the leader and the guiding light in this movement.”