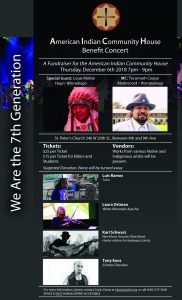 New York City, USA, 2018-Nov-27 — /EPR Network/ — “There will be an American Indian Community House for the next seven generations to come” insists Curtis Harris-Davia (San Carlos Apache). Davia has been serving as the volunteer executive director of the American Indian Community House (AICH) since this past summer. Davia has taken on the role at a most critical time when funding has all but dried up, and the onus is on NYC’s urban Indian community to preserve the rich legacy of AICH for the youth to come.

AICH is New York’s oldest Native organization, serving the city’s Native American, First Nations, and Indigenous community since 1969. While enduring a string of rough times over the past few years, and even facing the challenges of currently being a volunteer-run organization due to lack of funding, the AICH doors at 39 Eldridge street have remained opened, and its community unbroken.
“We will celebrate our 50 year anniversary in 2019. Obstacles have come and gone, but true to our resilience as Indigenous people, AICH is still here,” Davia proclaimed, with a well deserved confidence.
Through labor intensive hours of assessing the needs of AICH and diligent work, Davia has persevered in the struggle to turn AICH around. Even bringing in new grants and opportunities to begin re-hiring staff next year and slowly reintroducing select programs in 2019.
One of Davia’s efforts is “We Are The 7th Generation.” An upcoming benefit concert happening at 7pm on December 6th, at New York’s historic St. Peter’s Chelsea church. The concert boasts an amazing roster of Native talent including Grammy Award winner Ty Defoe (Oneida/Ojibwa), 2018 Native American Music Award nominee Tony Enos (Echota Cherokee), Award winning dancer and multidisciplinary artists Sheldon Raymore (Chyenne River Sioux), New York’s legendary Louis Mofsie (Hopi) who is the founder of the world-renowned Thunderbird American Indian Dancers, and a host of others! 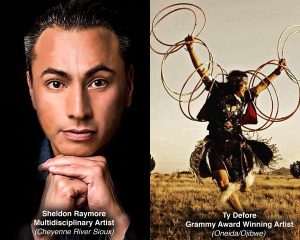 Given the difficult and disheartening financial and socio-political climate, it is evidently clear that under represented communities – especially Native American communities – must invest in themselves. Davia who has so generously volunteered his time for what is normally a well salaried position, as well as the incredible team of AICH community volunteers are tangible proof of such an investment.
“Our community has always come together when it counts.”
Davia continued, “what could be more important than preserving our culture and legacy for the next seven generations to come?”
Don’t miss the “We Are The 7th Generation” Benefit Concert, a fundraiser for the American Indian Community House on December 6th, 7pm at St. Peter’s Chelsea Church, 346 W 20th St, NY NY, 10011

Tickets on sale now at aich.org