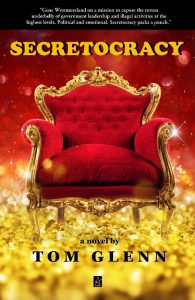 The story is set in Washington, D.C. in 2018, during the Trump administration.

Senior federal budget reviewer Gene Westmoreland refuses to approve funds for an administration initiative called Operation Firefang—building clandestine nuclear missile sites world-wide—on the grounds that it is illegal and violates treaty agreements. The administration attacks him. A general and a senator rebuke him, his phone is tapped, his car is tailed, and his adult son is trapped into a dangerous relationship. His boss, Clem, who opposes Firefang and refuses to fire Gene, is blackmailed and commits suicide. Now without protection, Gene is stripped of his security clearances and exiled to a warehouse to await termination. If he discloses what he knows, he will be prosecuted for revealing classified information.

Tom Glenn has worked as an intelligence operative, a musician, a linguist (seven languages), a cryptologist, a government executive, a caregiver for the dying, a leadership coach, and, always, a writer. His first four novels resulted from the thirteen years he shuttled between the U.S. and Vietnam on clandestine combat support missions.

His 2017 novel, Last of the Annamese, is set during the fall of Saigon which he survived, escaping under fire after the North Vietnamese were already in the streets. In March 2020, Adelaide Books published his latest novel, Secretocracy, a political thriller set during the Trump administration.

For information regarding this title and its Author, or any other title by Adelaide Books, or to receive ARC reviewers copy of this book, please write to office@adelaidebooks.org