Northbrook, USA, 2020-Nov-23 — /EPR Network/ —The global probiotics in animal feed market is estimated to be valued at USD 4.6 billion in 2019 and is projected to reach USD 7.0 billion by 2025, at a CAGR of 7.4%. The demand for probiotics in animal feed is increasing, owing to the growth in the consumption of animal-based products, the shift of the livestock industry from being an unorganized sector to an organized one, and the increased focus on animal health to prevent disease outbreaks. 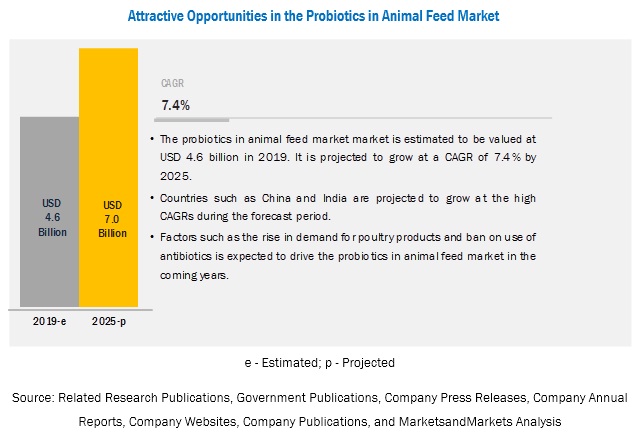 Several changes have been witnessed regarding the dietary habits and consumption patterns of the population, wherein a shift has been observed toward the increased consumption of meat and dairy products. This increase in the demand for various animal products such as milk, dairy products, meat products, eggs, and other non-food items has led to the growth in the usage of feed additives, thereby boosting the probiotics in animal feed market growth. The rapid growth in population has also increased the demand for food all over the world.

The livestock sector is under significant pressure to meet the growing global demand for high-value animal products. Consumers are becoming health-conscious and are focusing on nutrition-rich diets, which are provided by enriched feed products offered to the livestock. Livestock products such as meat, milk, and eggs are rich sources of micronutrients such as iron, zinc, and vitamins. The demand for probiotics in animal feed has increased due to the health benefits associated with the consumption of probiotics. They help in maintaining the microbial flora in the intestinal tract of animals and in enhancing the resistance against pathogens by improving their immune system. They also aid in the treatment of irritable bowel syndrome, inflammatory bowel disease, infectious diarrhea, and antibiotic-related diarrhea. This helps animals to derive maximum nutrition from the feed, which in turn increases the quality of animal products.

Opportunity: Ban on the use of AGPs (Antibiotic feed promoters) in animal feed

In 2006, the European Union (EU) implemented a ban on the use of antibiotics in animal feed. Antibiotic growth promoters (AGP) are chemicals/drugs that are added to animal feed to improve growth and the quantity of animal produce. According to the EU, the use of these drugs led to the development of antibiotic-resistant microbes to treat infections in humans and animals.

Following this ban by the EU, the use of antibiotics declined in many countries around the globe, especially in countries such as China, India, and the US due to their overexploitation or misuse. In January 2017, the US Food and Drug Administration (USFDA) banned the usage of antibiotics as feed supplements to help livestock and poultry grow faster. The new regulations also state that the over-the-counter sales of antibiotics used in feed is prohibited.

By livestock, the poultry segment is projected to dominate the probiotics in animal feed market during the forecast period.

By livestock, the probiotics in animal feed market is subsegmented into poultry, swine, ruminants, aquaculture, pets, and others. The poultry segment is projected to dominate the probiotics in animal feed market during the forecast period. The Asia Pacific region is expected to be a major revenue pocket in the coming years. The region is backed by a large population base with an increase in a number of urbanized population opting for protein-rich food options with poultry products such as eggs and meat. This is expected to increase the demand for probiotics in the poultry industry.

By source, the bacteria segment is projected to dominate the probiotics in animal feed market during the forecast period.

Bacteria strains such as lactobacilli, bifidobacteria, and Streptococcus thermophilus are used in the animal feed industry, owing to its health benefits such as the promotion of gut health and increased productivity, immunity, and overall performance of the animals. Several companies and research organizations are performing R & D to develop these strains for both animal and human consumption.

In 2018, the Asia Pacific region led the global probiotics in animal feed market. Factors such as a large livestock base, high meat consumption, and increasing consumer awareness about the positive impact of probiotics on animal health are driving the Asia Pacific market. Some of the countries contributing to the growth of this region include China, India, Japan, Australia, and New Zealand.

This report includes a study on the marketing and development strategies, along with a study on the product portfolios of the leading companies operating in the probiotics in animal feed market. It includes the profiles of leading companies such as Chr. Hansen (Denmark), Koninklijke DSM N.V. (Netherlands), DowDuPont (US), Evonik Industries (Germany), Land OLakes (US). Other players include Lallemand (Canada), Bluestar Adisseo Co. (China), Lesaffre (France), Alltech (US), Novozymes (Denmark), Calpis Co., Ltd. (Japan), Schouw & Co. (Denmark), Unique Biotech (India), Pure Cultures (US), Kerry (Ireland), and Mitsui & Co., Ltd. (Japan).