The release agents market is estimated at USD 925.4 million in 2018 and is projected to reach a value of USD 1,131.3 million by 2023, at a CAGR of 4.1%. The market is driven by the increased use of release agents in the baking industry, growth in demand for natural sources of ingredients, research & development driving innovation, and increase in consumer awareness & health concerns. On the other hand, international regulations governing the use of release agents in food are the key factors hindering the growth of this market. This indicates that there is immense scope for the growth of the release agents market, globally. 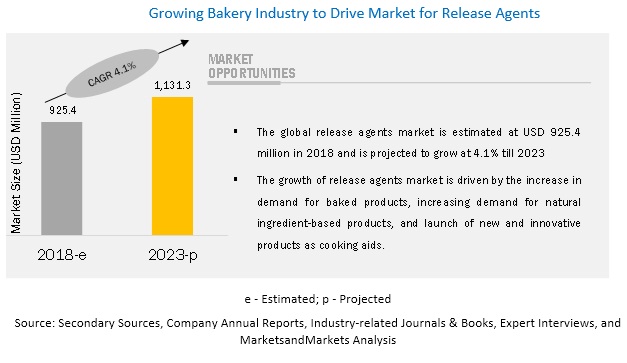 Scope of the Report:

On the basis of form, the market for release agents has been segmented as follows:

On the basis of ingredient, the market for release agents has been segmented as follows:

On the basis of application, the market for release agents has been segmented as follows:

On the basis of region, the market for release agents has been segmented as follows:

Growth in demand for natural sources of ingredients is driving market growth.

Ingredient labeling has become mandatory in developed economies due to increase in consumer awareness. This has brought about a change in the use of ingredients for production by the manufacturers, with several manufacturers preferring natural and organic food additives over synthetic alternatives. The demand for natural ingredients is on the rise, with manufacturers launching various products with these ingredients that can provide an added advantage to drive the consumption among health-conscious consumers. As some of the release agents, such as lecithin and vegetable oils, are of a natural origin, they are poised to observe the growing adoption by the industry that drives its market growth. Vegetable oils are used for various industrial applications such as shortening, lubrication, oiling, releasing, and as surfactants. In the baking industry, vegetable oils are used as natural sources of release agents; however, they did not provide the required texture for most applications. Hence, a chemical process called hydrogenation to convert unsaturated liquid oils into a semi-solid trans-fat was developed. Recently, several new fats & oils have emerged as alternatives to semi-solid, partially hydrogenated vegetable oils. Palm oil offers a long shelf-life without the need for chemical processes due to the presence of natural antioxidants and a low level of unstable polyunsaturated fat.

Strict international regulations governing the use of release agents in food is restraining growth of the market.

International bodies such as the National Food Safety and Quality Service (SENASA), Canadian Food Inspection Agency (CFIA), US Food and Drug Administration (FDA), and Committee on the Environment, Public Health and Food Safety (EU) are associated with food safety regulations. These organizations have control over the usage of different chemicals and materials used in food processing, directly or indirectly. As release agents that are used for bakery applications come in indirect contact with the food product surface, they have to adhere to food safety regulations. The USFDA has published the list of substances and their quantity allowed to be used in food processing.

The demand for food release agents is high in developed markets such as the US and Europe. Developing countries, namely, China and India, in the coming years, will experience a strong upsurge in demand for release agents. This demand is driven by an increase in the production of processed and convenience foods. The market for release agents in developed economies such as the US and Europe is saturated, as their penetration and adoption are quite high. Emerging economies such as India and China, in the Asia Pacific region, are exhibiting high growth. The Asia Pacific region also provides the cost advantage in terms of production and processing. High demand, coupled with low cost of production, is a key feature, which will aid release agents suppliers and manufacturers target this market. The trend of consumer’s preference for low-fat products is rapidly rising, and marketing campaigns are planned around highlighting their use and health benefit claims. ADM produces lecithin, which functions as a low-fat dressing, attracting market attention specifically from those who aspire to produce low-fat food products. The demand for low-fat products may be driven by the increase in processed foods production and innovation in almost all segments, such as meat products, dairy, and bakery & confectionery products. However, the demand for the usage of release agents is expected to grow continually in early adopting countries such as Japan and exponential growth is projected in new and emerging markets such as Australia and other Asia Pacific countries

Rise in price of raw materials such as vegetable oils poses a major challenge for manufacturers.

European consumers are considered to be more health-conscious and pay increasingly close attention to the ingredients used in the food products they consume. This high level of awareness has resulted in the demand for natural and non-GMO foods in the region. The increasing demand for processed food is also one of the major factors driving the market in the European region.

In the Asia Pacific region, the use of release agents was low in proportion to its dense population. This can be attributed to the comparatively low sales of bakery and meat food products. Hence, there is still a huge untapped market for bakery and meat products, which is opening up opportunities for the release agents industry in this region.

This report includes a study of marketing and development strategies, along with the product portfolios of the leading companies. It includes profiles of leading companies such as ADM (US), Avatar Corporation (US), Par-Way Tryson (US), AAK AB (Sweden), and Associated British Foods (UK). Apart from these companies, other release agents companies, such as Mallet & Company (US), DowDuPont (US), IFC Solutions. (US), Lecico (Germany), Lallemand (Canada), Masterol Foods (US), Puratos (Belgium), Zeelandia (Netherlands), DÜBÖR (Germany), Sonneveld (The Netherlands), and Bakels (Switzerland).