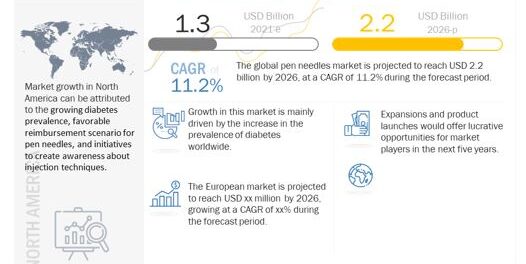 The Growth is largely driven by the growing prevalence of chronic diseases and the favorable reimbursement scenario in selected countries. On the other hand, the preference for alternative modes of drug delivery, poor reimbursement in developing countries, and needle anxiety are expected to restrain the overall market growth. Misuse of insulin pens and reuse of pen needles are the challenges faced by the market. The growing preference for biosimilar drugs and emerging markets are areas of opportunity in the market.

Novo Nordisk A/S (Denmark) holds the second position in 2020. The company’s Diabetes Care segment, which offers safety pen needles (NovoFine Autocover) and standard pen needles (NovoFine Plus and NovoTwist), is its largest and fastest-growing business. As a significant volume of Novo Nordisk’s insulins is used in injectable devices, the company is witnessing a surge in the sale of its insulin pens and supplies, including pen needles. The company has distribution and production facilities in more than 75 countries and markets its products in more than 180 countries. In addition, Novo Nordisk has strategically placed its facilities in five countries across four continents.

The pen needles market is segmented into North America, Europe, Asia Pacific, Latin America, and the Middle East & Africa. Asia Pacific accounted for the highest growth of the needles market in 2020. The medical industry in the region has grown significantly over the years, and manufacturers are beginning to focus on providing well-established technologies to ensure sustainable and strong future revenue growth. Being a high-growth market, many manufacturers are also extending their global manufacturing bases to the APAC. With the low-cost manufacturing advantage, China and India are regarded as the most profitable manufacturing and R&D locations by most manufacturers.

Based on the mode of purchase, categorized into retail and non-retail. The retail segment accounted for the largest share during the forecast period. The significant discounts offered on online/retail purchases of pen needles, high convenience, increasing awareness on pen needles, and the favorable reimbursement scenario in North America and Europe are some of the key factors driving the growth of pen needles market retail segment.

The therapy segment, insulin therapy is expected to grow at the highest CAGR.

Based on therapy, categorized into insulin therapy, glucagon-like peptide-1 (GLP-1) therapy, growth hormone therapy, and other therapies. In 2020, insulin therapy held maximum of the global pen needles market, primarily due to the high and growing diabetic population globally. This segment is also expected to grow at the highest rate during the forecast period.