Northbrook, USA, 2021-Nov-24 — /EPR Network/ — The report “Grain Alcohol Market by Type (Ethanol, Polyols), Application (Food, Beverages, Pharmaceutical & Healthcare), Source (Sugarcane, Grains, Fruits), Functionality (Preservative, Coloring/flavoring agent, Coatings), and by Region – Global Forecast to 2026” According to MarketsandMarkets, the global grain alcohol market size is estimated to be valued at USD 12.2 billion in 2021 and is projected to reach USD 14.9 billion by 2026, recording a CAGR of 4.1% during the forecast period. The increase in demand for grain alcohol in various industries such as food & beverages and health & personal care is driving the grain alcohol market globally. The grain alcohol market is gaining momentum due to increase in the production of beer and increasing demand of craft beer. The use of ethanol in the beverage industry has resulted in the growth in the market of grain alcohol for beverage applications. Grain alcohol is also used as preservatives, food color, or coatings in the end products. 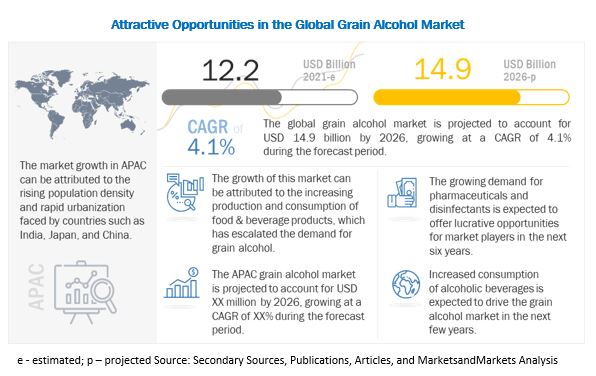 Beer is a widely consumed alcohol beverage, and the production of beer has increased significantly during the last decade. Increasing global demand for beer production is driving the breweries to source grain alcohol from barley. The usage of alcohol manufactured from barely in the beer industry is projected to account for a large share of the market. The growing popularity of craft beer and local beer is likely to further increase the demand for domestic malt over the next five years.

The Ministry of Health across various countries, namely, Australia, Brazil, the US, and India, has taken up initiatives on the harmful effects of alcohol consumption. The alcohol market is highly price sensitive; therefore, even a slight increase in its price by the government or any other regulatory bodies can have a significant impact on the consumption levels. This in turn may affect the grain alcohol market for beverage applications adversely, leading to a fall in demand.

The beverages segment, by application, is projected to witness significant growth during the forecast period.

The beverages segment includes beer, wine, spirits, and other beverages such as ready-to-drink (RTDs), premixes, cider, and perry. Beer is the worlds most widely consumed alcoholic beverage, and the third-most popular drink overall, after water and tea. Global beer consumption is mainly driven by growing disposable income, improvements in the quality of beer, marketing & advertising activities, and a steadily growing beer-consuming population base. Wine is an alcoholic beverage made by fermenting grapes or other fruits. Spirits are alcoholic beverages produced by distillation of ethanol obtained by the fermentation of grains, fruits, or vegetables. The ethanol concentration in spirits is increased above that of the original fermented mixture by a method called distillation. With the rapidly rising demand for alcoholic beverages and the increased production of the same, the beverages segment is likely to grow at the highest rate during the forecasted period.

The European grain alcohol market is the largest in the world, and despite very high per capita consumption levels, market growth has remained attractive and stable. The presence of a large food & beverage industry offers the European grain alcohol market a prominent consumer base with opportunistic growth prospects. The market in this region is estimated to be driven by development in the Eastern & Southeastern European countries. Europe is the one of the largest markets for sugar polyols. As consumers’ demand for low-calorie food is high, the food industry prefers the use of sugar polyols, which are similar to sugar but with low-calorie value. These sugar polyols act as bulking agents, which provide the mass required and sweeten the product without adding any additional calories.