“This novel-in-stories results from the many years I spent in Vietnam during the war. Nearly all the characters are based on people I knew, many of them killed by the Vietnamese Communists. Most of the incidents described are drawn from real events or an amalgam of happenings. Even now, after almost forty years, I still hurt. And I’m one of the lucky ones.”— Author 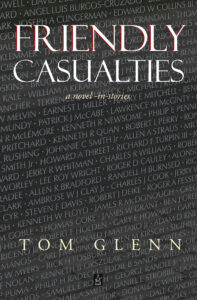 Tom Glenn has worked as an intelligence operative, a musician, a linguist (seven languages), a cryptologist, a government executive, a caregiver for the dying, a leadership coach, and, always, a writer. His first four novels resulted from the thirteen years he shuttled between the U.S. and Vietnam on clandestine combat support missions. His 2017 novel, Last of the Annamese, is set during the fall of Saigon which he survived, escaping under fire after the North Vietnamese were already in the streets.

Description of the company: ADELAIDE BOOKS LLC is a New York based independent company dedicated to publishing literary fiction and creative nonfiction. It was founded in July 2017 as an imprint of the Adelaide Literary Magazine, with the aim to facilitate publishing of novels, memoirs, and collections of short stories, poems, and essays by contributing authors of our magazine and other qualified writers.

We believe that in doing so, we best fulfill the mission outlined in Adelaide Magazine – “to promote writers we publish, helping both new and emerging, and established authors reaching a wider literary audience.”

Our motto is: We don’t publish classics, we make classics.