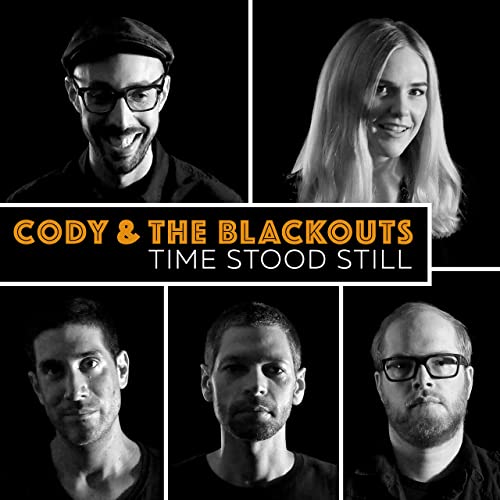 We’ve all had those moments.

That instant when realisation hits. The sudden knowledge destiny is unfolding right before our eyes. It could be meeting a potential soulmate, achieving a lifelong goal, watching your team salvage victory from almost certain defeat.

The new single from Los Angeles five-piece Cody & The Blackouts captures that lightning in a bottle – not just once, even twice, but thrice. Time Stood Still, penned by the band’s lead singer and songwriter Cody Hudock, references three momentous events in history: the birth of Gutenberg’s printing press, Freud’s breakthrough theories of psychoanalysis, and how the Beatles and their producer George Martin changed the game forever when it comes to writing and recording popular music. Hit, hit, hit.

If anyone could weave these wildly disparate subjects together in the context of a single pop song, it’s Cody Hudock. Born into a family of songwriters, Hudock learned the trade from his father and older brother. “I picked it up quite naturally, in much the same way the son of a baker might understand intrinsically how to make a good loaf of bread from their first go at it,” Hudock says.

After acquiring early performance experience playing keys in older brother Jordan’s popular LA indie bands, Coalinga and Marvelous Toy, Hudock launched his own songwriting vehicle, Cody The Band. The group released three EPs before Hudock embarked on his solo debut, 2016’s ambitiously titled The Great American Album. Released under his own name, it garnered some delirious word of mouth: “If there were an award for ‘greatest living songwriter you’ve never heard of’, then Cody Hudock’s sterling solo effort would place him firmly in the running,” gushed LA blog The 704.

What would become the core of The Blackouts played together on The Great American Album: Cody, his wife and vocalist Joanna Hudock, and multi-instrumentalist Jordan Bennett. Drummer Brent Stranathan and bassist Will Weissman were soon added to the fold, as the band began playing shows across Los Angeles. When Bennett moved to Atlanta a year later, guitarist Jimmy Holman proved a worthy replacement.

“Time Stood Still” by Cody and the Blackouts –