The Regency era, scandal, a handsome duke and vying maidens.  These have all the makings of a typical historical romance.  This genre continues to be commercially viable despite criticism by those who claim these novels lack literary merit.  Even still, some readers say they enjoy learning historical facts while devouring a decadent tale in which love surmounts all else.  Despite the known expectations of historical romance novels, especially the plethora set in England, some authors have provided an alternative.  The House of Marchesi is set in 18th century Milan.  It 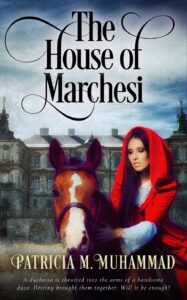 was one of several recognized city states at that time with much autonomy and its own royal hierarchy.  Yet, the author acknowledges the reciprocal influence that most European countries had on one another.  This included manners, the arts and even dress–especially the mantua.  Thus, to read a historical novel set in Italia would not necessarily rip the typical reader away from what they have grown to become accustomed to with historical romance novels.  It may be considered an expansion with a change of scenery and perhaps language.

Patricia invites the reader to open the pages to a new story, wherein a duchessa seeking adventure while on horseback receives more than she anticipated as she lands into the arms of a surprised duca.  Dashingly handsome with mesmirizing eyes, the duchessa opens herself to a wonderous site and he opens his house to her.  As he cares for her and seeks to return her to her home, servants of the duchessa’s house make an unsavory discovery.  Now the maidservant must trek to where the duchessa has fallen and warn the duca to keep her.  It is the only manner in which she would be forever safe. In time, the duchessa and the duca grow in affection with one another. Memory, conspiracy, and a lot of help from servants protect her.  The duca and duchessa realize that the Crown has sought their protection as well, but will this be enough?

Written with a bit of humour, with some unexpected heroes, The House of Marchesi provides a different option to the historical romance consumer while providing what the reader longs for, a story where love and marriage triumphs in the end.

The House of Marchesi is currently available for purchase as an ebook from these online retailers:

About the author: Patricia M. Muhammad is a multi-genre fiction author of diverse books including interracial relationships and multi-racial main characters. The House of Marchesi is her fifth historical romance novel. She has written 20 novels. Patricia is currently based in the United States.