The global human growth hormone market size is expected to reach a value of USD 8.5 billion by 2027, registering a CAGR of 8.2% over the forecast period, according to a new report by Grand View Research, Inc. Introduction of novel therapies, increasing R&D activities, and the rising awareness for the diagnosis and treatment of growth hormone (GH) disorders are expected to drive the market over the forecast period. 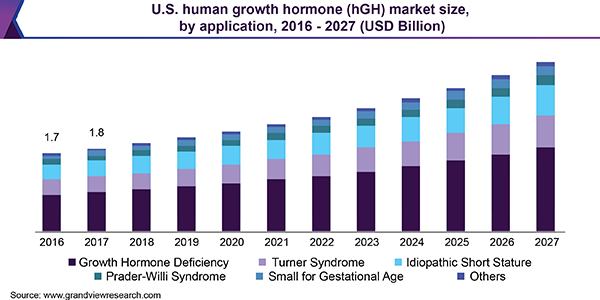 Grand View Research has segmented the global human growth hormone market on the basis of application, distribution channel, and region:

Based on the Application Insights, the market is segmented into Growth Hormone (GH) Deficiency, Turner Syndrome, Idiopathic Short Stature, Prader-Willi Syndrome, Small for Gestational Age and Other.

Based on the Distribution Channel Insights, the market is segmented into Hospital Pharmacy, Retail Pharmacy, Online Pharmacy and Specialty Pharmacy.

The major companies operating in the market are adopting mergers, partnerships, and acquisitions as key strategies to expand their geographic reach and provide access to their solutions. For instance, in October 2018, Novo Nordisk and Strongbridge Biopharma signed an agreement to acquire the rights to MACRILEN in the U.S. and Canada. MACRILEN (macimorelin) is the first and only oral drug approved by the FDA for use in adult growth hormone deficiency diagnosis.

Some prominent players in the global human growth hormone include: