Hick Hop Music Is About To Get A Intellectual Awakening 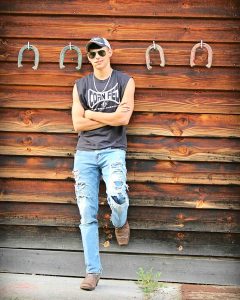 Virginia, USA, 2016-Jul-27 — /EPR Network/ — If you like you hip hop with a country flare then this is the artist that you are waiting to hear. Part country part hip hop part soldier and all Man. Ladies and Gentlemen May I introduce to you “Brett Lee”

Brett Lee was born on November 16 and the world had no idea that it was blessed with a intellectual lyricist. Brett started rapping at the tender age of 12 and never looked back. Brett Lee was found by the super producer team 2partsanalog on You Tube via a simple rapping video. MOG heard him and knew immediately that this kid was going to kill the game. Even though Brett is under the Hick Hop sub genre he is by no means limited to just one style of music.

Brett Lee plans to take his rapping skillz to places unheard and shock the world with his one of a kind style of country intellectual spittin. Ever since hooking up with 2partsanalog Brett has had his eye on changing the appearance of hick hop in a major way. He wants to show the world that country rappers are not just naked girls, liquor and tattoos. He wants the world to know that country rappers are thinkers too. 2Partsanalog and Brett Lee are working his new mix tape which will change the way the world views hick hop.

Brett is happily married with a son ,enlisted in the Army, and works a full time job. He looks forward to committing all of his time to his music but in the mean time he is grinding and making a future for him and his family.

Be on the lookout for his new album and discover the new sound of Hick Hop, “Brett Lee Music”

You can check out his humble beginnings below.